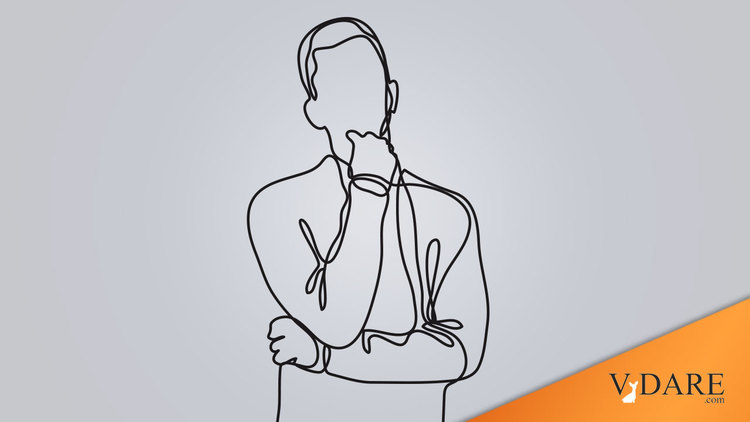 Sailer In TakiMag: "What If I'm Right?"

What If I’m Right?
Steve Sailer

Since the previous century I’ve been articulating in the public arena an array of interconnecting ideas about how the world works. For example, I tend to suspect that racial differences in achievement in 2021 have more to do with nature and nurture, with culture and human biodiversity, than with unspecifiable malevolence on the part of white men as dictated by the theory of systemic racism.

(Note that I don’t put very much effort into telling you how I think the world should work, just how it does work. At least, the latter’s testable.)…

What if I’m right?

What if my way of thinking is, in general, more realistic, insightful, and reasonable than the conventional wisdom?

I dislike thinking of my concepts as an ideology. I don’t propound “Sailerism.” I lack the ambition and the ego. I am by nature a staff guy rather than a line boss. I like to think of my approach to understanding human society as one that will eventually seem obvious to everybody, so I shouldn’t claim credit now for what is simply solid empirical thinking applied to the more contentious subjects.

Instead, I like to tell myself, I should just keep coming up with more ideas that are (in declining order of importance to me) true, interesting, new, and funny. Eventually, people will notice how much better my approach to reality has been than that of the famous folks winning MacArthur genius grants and try to figure out for themselves how I do it so that everybody can do it too.

Or at least that’s what I hope.

Article
SAID IN SPANISH [5 Items]: Guatemalan President Blasts Biden On Migration—But He’s Still Not On Our Side; U.S. Deportations To Guatemala Down; Remittances From U.S. To Mexico Up; ETC
MORE...
POPULAR TAGS