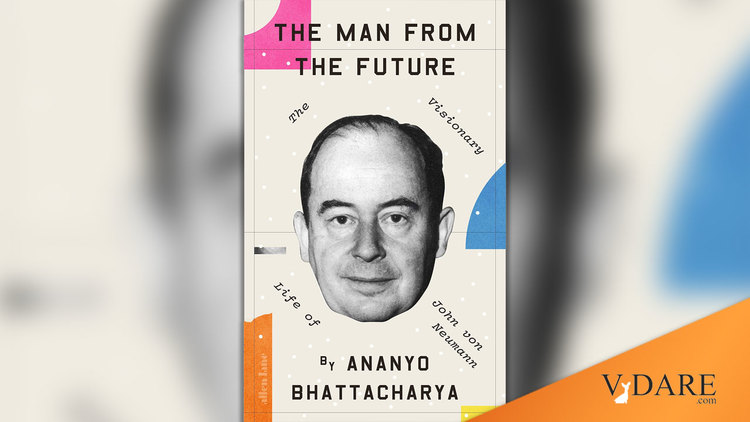 Sailer In TakiMag: The Man From The Future—The Visionary Life Of John Von Neumann

The 1940s, when so many new technologies such as atomic weapons and computers were rushed into existence, remains the peak real-life science-fiction decade. So there’s a steady demand from highbrow readers for biographies of the various Manhattan Project superheroes. The latest is The Man From the Future: The Visionary Life of John von Neumann by Ananyo Bhattacharya.

The polymath John von Neumann (1903–1957) was the most spectacularly brilliant of “The Martians,” the ethnically Jewish Hungarian geniuses at Los Alamos who spoke English with Count Dracula accents.

Reading The Man From the Future, it’s hard not to acknowledge mathematics as the king of the disciplines. Von Neumann was first and foremost a mathematician, a protégé of David Hilbert, the most influential mathematician of the early 20th century. He delighted Hilbert by offering, as a teenager, a response to Bertrand Russell’s Paradox that was undermining confidence in Hilbert’s program for mathematical progress.

From von Neumann’s position of strength on the intellectual high ground of math, the adult prodigy then conducted a series of lightning raids on lesser fields: …