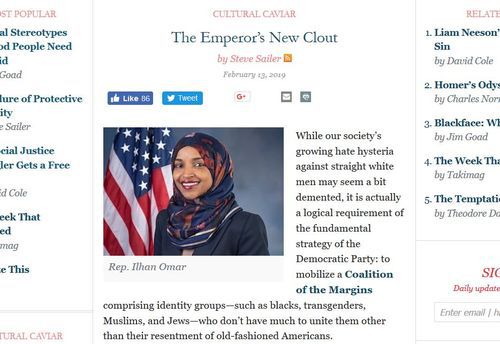 From my column in Taki’s Magazine:

While our society’s growing hate hysteria against straight white men may seem a bit demented, it is actually a logical requirement of the fundamental strategy of the Democratic Party: to mobilize a Coalition of the Margins comprising identity groups—such as blacks, transgenders, Muslims, and Jews—who don’t have much to unite them other than their resentment of old-fashioned Americans. …

Newly elected Somali Muslim Rep. Ilhan Omar (D-Mogadishu) was struggle-sessioned by the Democratic leadership into apologizing for pointing out that pro-Israel Jewish-Americans are influential because they contribute a lot of money to politicians.

By the way, I’m struck by how much Rep. Omar, who is quite pretty for a member of Congress, looks like that Orientalist hijab fetish poster of a couple of years ago by Shepard Fairey come to life.

I think American women are starting to get into the idea that when the Muslims take over, they can throw their yoga pants away.

They won’t have to diet or workout or worry about their hair anymore. They’ll just wear hijabs and concentrate on doing their makeup adroitly so they look exotic and hot.

Unfortunately, that strategy doesn’t always work as well as Fairey might have you believe.