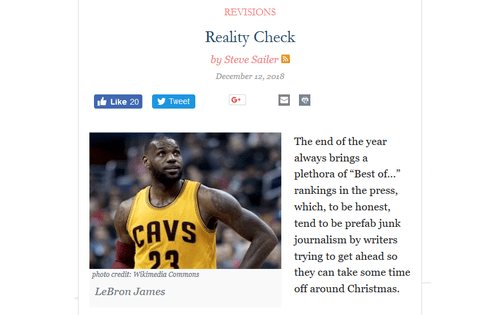 The end of the year always brings a plethora of “Best of…” rankings in the press, which, to be honest, tend to be prefab junk journalism by writers trying to get ahead so they can take some time off around Christmas.

I’ll have to admit that over the years I’ve perpetrated a few such lists. But I have consumed far more. The truth is that I’m a fan of other people’s rankings, whether annual or perpetual, subjective or objective, single or group.

But unlike most, I usually don’t care all that much who is No. 1. Instead, I find rankings a fun source of examples for learning more about how the world works, a useful compromise between isolated anecdotes, which could well be unrepresentative man-bites-dog singularities, and opaque Big Data analyses intended to leave readers reliant upon trusting the researcher’s math.

There is much prejudice among social scientists, however, against calling attention to examples. For instance, economist Tyler Cowen highlighted on his Marginal Revolution blog a new academic paper, “Wage Discrimination in the NBA: Evidence Using Free Agent Signings,” that asserts that racial discrimination by white basketball fans is largely why, when they adjust for performance:

Black players receive on average 20.5% less than their counterparts, all else equal.

The authors don’t make available their rankings and don’t cite any examples of underpaid and overpaid NBA players, so it’s difficult to perform reality checks to see what they are doing right or wrong. Why not list your estimates of the best and worst bargains in the NBA? Wouldn’t that be interesting to readers?