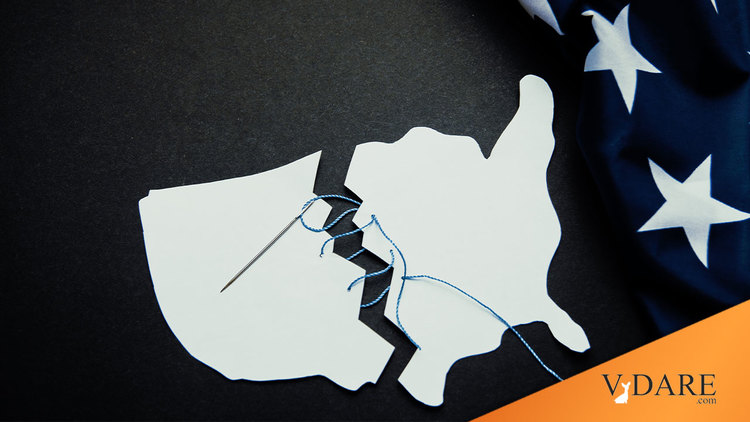 Sailer In TakiMag: Let’s Not Break Up The US

Let’s Not Break Up the USA
Steve Sailer

Out of understandable frustration with their countrymen, Americans increasingly assert that if their own side fails to win the current domestic political struggle, the United States of America, history’s mightiest country, should (and/or must) break up into separate sovereign territories. After all, nobody gets on our nerves like our fellow citizens.

For instance, a columnist for the San Jose Mercury-News reviewed David French’s book about how California or Texas might secede, setting off a chain reaction of secessions, and concluded:

But by this Californian’s lights, the final results of French’s Calexit scenario don’t sound so bad. New England creates its own democratic nation. Millions of Americans relocate to places better aligned with their politics. And Californians seem happier.

Similarly, numerous conservatives have fantasized about carving out a Red America in the hinterlands.

But the war in Ukraine is a reminder that this impulse is unwise. When you believe that things can’t get any worse, it’s worth noting that, yes, they can, such as an outbreak of armored warfare. (And even that can get worse too, with the possibility of nuclear exchanges.)

… Breaking up the USA into smaller states would open the door for massive meddling in the new minor countries by both overseas powers and local neighbors, as the chronicles of the ex–Soviet Union suggest.

Whether you blame poor Ukraine’s current agony most on Russia’s obvious aggressions or NATO’s subtle machinations is a matter of opinion, but the lesson is clear: If you can avoid it, don’t be Ukraine.