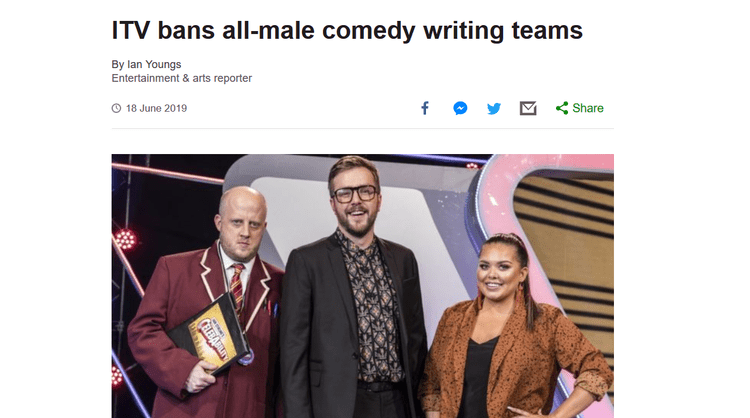 Banning All-Male Comedy Writing Teams Because Diversity Is NOT Funny

ITV will no longer commission comedy shows with all-male writers’ rooms, the broadcaster’s head of comedy has said.

Saskia Schuster said she realised last year that “an awful lot of my comedy entertainment shows are made up of all-male writing teams”.

She said: “Too often the writing room is not sensitively run. It can be aggressive and slightly bullying.”

Imagine! A comedy writing room that is not sensitively run … What is the world coming to?

… Last year, when reviewing the gender balance of sitcom scripts she was sent, she realised that for every script she received from a female writer, she got five from men.

… They don’t thrive as the lone female voice in a writers’ room.

She has now changed ITV’s contracts so any shows that are commissioned or recommissioned “must aim towards 50:50 gender representation”. ...

“If you have the same type of writers in terms of race or sexual orientation or gender, then you’re only getting one kind of joke, and if you’ve got different voices in the room, you’re getting different kinds of jokes,” she said.

“You want to represent the wide audience that’s watching. You want diversity in voice, or else it won’t be as funny because it won’t be appealing to as many people.”

Diversity is our Strength, and that’s no laughing matter.