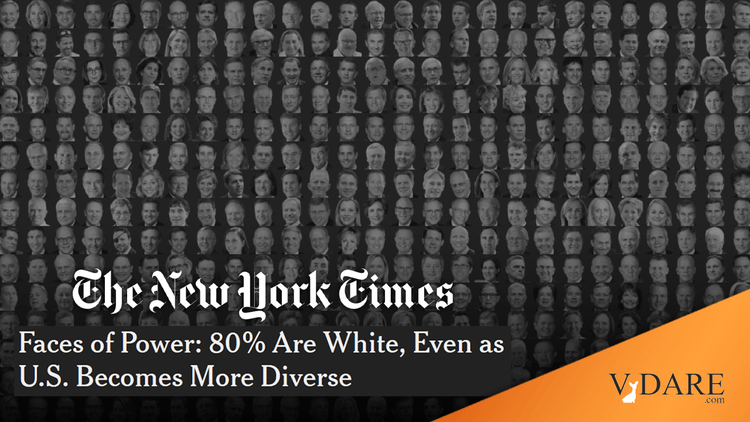 Sailer in Taki's on the NYT's White-Counting

While The New York Times is quite worked up over White Privilege, which it assumes is proven by white overrepresentation among the powerful, it has never shown any interest in the exactly parallel concept of Jewish Privilege.

And yet Jews are far more overrepresented among the NYT’s “Faces of Power” listing of the 922 most important Americans than are whites in general (although possibly less so than you might expect). A Twitter user named Philippus Arabus went through the list and identified 120 Jewish individuals compared with the Times’ count of only 85 blacks, 62 Hispanics, and 32 Asians.

Jews, who make up about 2 percent of the population, are 13 percent of the NYT’s rankings. One might think that Jewish pundits who promote the concept of White Privilege by pointing to the greater executive power per capita of whites than blacks should ponder that the exact same logic would suffice to demonstrate the existence of Jewish Privilege.

I then explain in which types of jobs in the Times‘ listing of powerful people are Jews most and least overrepresented.

Please read the whole thing there.