Thursday’s front page story from the Sacramento Bee about Afghan translators who haven’t yet been rescued with a visa to America is a reminder that military entanglements abroad have a way of becoming a runway for immigrants. We further learn that thousands of Afghan nationals have settled in the Sacramento area on Special Immigrant Visas as a result of their help to the US military. (Sacramento is a diverse city, where over 22 percent are foreign born.) 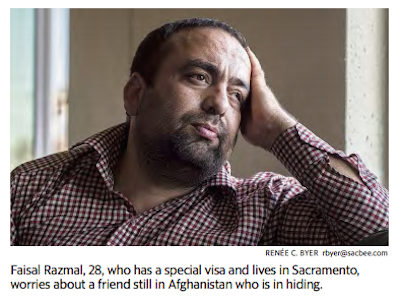 It’s a familiar story: American troops need local help to be more effective in stomping the bad guys, and those helpers then must be rescued and resettled in the USA because they can no longer live in their homeland — which seems a failure of the whole project somehow. And the worse the war goes, the more foreigners must be saved from living in their country and plunked down in some American town far from Washington DC where the decisions were made. One thinks of Vietnam, where the failure there brought a flood of refugees and boat people to the point where well over a million now reside in this country.

Now the US is mucking about in jihad territory, with troops in Syria, Iraq and Yemen. We can see that this means more Muslim immigrants, which is exactly what America does not need.

Muslims seem to come with a recessive jihad gene that may suddenly pop into activity in the younger generation. Faisal Razmal, the Afghan translator pictured above, may be a fine fellow who genuinely aided US soldiers in Afghanistan. However, a cousin Mohammed who could eventually come via family chain migration may not be so friendly. And some young Muslims who are born and raised in America by apparently responsible parents can go violently jihad through a combination of youthful hormones and internet-induced guilt, reflecting the second-generation problem common to Islamic immigration.

Therefore the optimal number of Muslim immigrants is ZERO, and the military project to squash ISIS should ideally be conducted via drones and robots only — no troops on the ground who need translators or any human contact.

That strategy is not likely, but the standard human approach creates unacceptable collateral cost for the homeland.

Afghans who aided U.S. forces fighting the Taliban can no longer receive special visas for their service, at least until year’s end, said U.S. senators and advocates who are trying to pass legislation to restart the flow of newcomers.

That visa halt promises to thwart the reunion plans of many in Sacramento’s growing community of Afghan Special Immigrant Visa, or SIV, holders, considered the largest in the United States. Many of them are still praying for loved ones to arrive from the war-torn Central Asian country.

The U.S. Embassy in the Afghan capital of Kabul has officially stopped accepting applications to the SIV program established by Congress in 2009 under the Afghan Allies Protection Act, said Matt Zeller, the founder of No One Left Behind, a nonprofit group dedicated to helping Afghan interpreters begin new lives in the United States. More than 45,000 Afghan SIV holders and their family members have been resettled in the U.S. over the last eight years, including translators, helicopter pilot trainers, doctors, engineers and intelligence specialists.

Every year until 2016, Congress had authorized 4,000 Special Immigrant Visas for Afghans, but last November, Congress extended the program for only 1,500 applicants for all of 2017, far fewer than those eligible to come, advocates said. Many of the applicants live in danger of retaliation by the Taliban and other groups in Afghanistan.

Those 1,500 visas have just run out, less than three months into 2017, shocking many of the estimated 7,000 Afghan SIV holders and their families who have resettled in the Sacramento area, Zeller said. Some have relatives and friends who have applied to come to Sacramento.

“Right now, there are 10,000 applications pending, and each one represents a family of three to four people, so there are 35,000 people whose lives are at stake,” Zeller said.

One of those people is Nawed Mohammadi, a 26-year-old translator who’s worked for U.S. forces since he was 16, said close friend, translator Faisal Razmal.

“I call him my godbrother – we trained the Afghan National Army side by side,” said Razmal, who’s lived in Sacramento for two years.

Since coming to Northern California, Razmal was shot in the face with a flare gun by an alleged gang member and has otherwise struggled to make a life in his new home. Still, he said he feels much safer here than in Afghanistan.

On a recent day in his apartment, Razmal whipped out his cellphone and showed off a photo of Mohammadi, a young man in a green army jacket.

He called Mohammadi “the best guy in the world, honest, a hard worker with combat experience in Paktia, the most dangerous province in Afghanistan.”

After Mohammadi learned of the ban, he called Razmal asking for help.

“He’s just gotten engaged and wants to start a family, but he’s in hiding now,” Razmal said. “I’m afraid I might lose this guy.”

The same goes for Razmal’s cousin and a dozen other translators who have applied for Special Immigrant Visas and have been in limbo for years while they wait for their visas to be approved, he said.

“If you’re the average interpreter in Afghanistan getting screwed by this, you’ve been in hiding for the last four years since you applied and now you’re being told, ‘Sorry, it ran out,’ ” Zeller said.

The U.S. State Department did not respond to several requests for comment from The Bee about the Special Immigrant Visa situation.

If the U.S. government stops issuing SIVs, that could compromise American troops relying on translators in Afghanistan, Iraq and Syria, said Zeller, a former Army intelligence officer, who said his translator Janis Shinwari saved his life when he was ambushed in an intense firefight.

“My friends overseas are telling me this is a guaranteed death sentence,” Zeller said. “My Afghan translator said, ‘I would never have worked for you guys if I thought I couldn’t get out.’ ”

“This is a matter of life and death for interpreters and other support staff,” Shaheen said in a statement. “As we speak, many of them are being hunted down by the Taliban and other terrorists. We have a moral obligation to protect the thousands of Afghans who put themselves, and their families, at risk to help our soldiers and diplomats. To abandon them now would be a stain on our nation’s honor. There’s no excuse for Congress to not act in a bipartisan way to approve these additional visas as it has done in the past.”

McCain added that the Afghan war has gone on for more than 10 years, and “we simply cannot win this war without the assistance of the Afghan people who put their lives on the line to help American troops and diplomats serving in harm’s way.”

Afghanistan was not included in President Donald Trump’s ban on entry of people from seven predominantly Muslim nations. The Trump administration has also cut the number of incoming refugees this year to 50,000, less than half the 110,000 admitted in 2016.

Zeller, who’s based in Washington, D.C., said Congress could lift the ban and restart the program with additional visas in a matter of weeks. That’s what happened in July 2014, when then-Secretary of State John Kerry called on Congress to authorize more visas as they were about to run out, Zeller said.

“Two weeks later, a bipartisan Congress passed a brand new bill to allocate an additional 1,000 Afghan visas,” Zeller said. “The only thing preventing this from getting done now is the lack of courage and will to do the right thing.”

Not a single Afghan SIV has been linked to any act of terrorism, said Zeller, who plans to open a branch of No One Left Behind in Sacramento this summer. The Afghans who served alongside him and other U.S. troops were “the best of the best,” Zeller said, “the most loyal, patriotic people you can possibly imagine.”