Despite all the assumptions about Tragic Dirt, black neighborhoods in Los Angeles tend to be conveniently located. For example, Leimert Park is about 4.5 miles south of Koreatown on Wilshire Blvd. where former Clippers owner Donald Sterling has put up so many high rises for his favorite tenants, and 8 miles fr0m LAX.

Not surprisingly, black renters in Leimert Park are worried that they’ll get squeezed out if Los Angeles’s current post-Bratton low crime era continues. 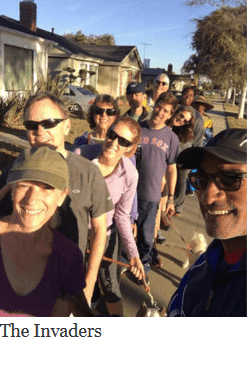 Selfie of white joggers in African American neighborhood sets off debate, and quest for understanding

It’s the selfie that set off a gentrification debate.

It was the selfie that set Leimert Park talking.

There was DeMille Halliburton, his arm outstretched in the foreground, shooting a photo of the Saturday running group the African American entertainment industry insurer has long organized.

Behind him stood eight white neighbors, smiling under a sunny sky, a few holding on to their dogs’ leashes. Tucked in the very back were two black runners.

The photo Halliburton uploaded that day in October set off a storm of debate in Leimert Park, a middle-class, traditionally African American neighborhood.

The photo generated numerous comments on social media, with many expressing concerns about what they saw as the neighborhood’s changing demographics. For some blacks, the photo was a symbol of how they were losing clout in the neighborhood amid rising home values.

Another image sparked similar Internet debate. A resident posted a picture from the Baldwin Hills Crenshaw Plaza shopping center’s website showing four white women piled in a car, presumably going to or coming from the mall.

… But while the statistical change remains small, many residents say they are seeing greater diversity in the area.

Halliburton has lived in Leimert Park for 12 years and says he has seen his all-black block gradually shift as four white new families moved in….

As I wrote a couple of years ago:

My guess is that about 2070, African-Americans will think back in astonishment at the amazing places where their ancestors had once lived—the heart of Los Angeles; Manhattan, San Francisco and Oakland; the Chicago lakefront; the nation’s capital—and wonder how they let it all slip away.