Rush Limbaugh addressed the Omnibungle yesterday and brought up a story a point I made Sunday night: “Reprogramming” and other budgetary legerdemain during a continuing resolution mean administrative flexibility than with a formal budget.

RUSH: I found something on a website claiming to be U.S. News. And the headline is: “Building a Wall in the Dark.” The subhead: “Congress is using budget shenanigans to funnel Pentagon money to President Trump’s border wall.” And the writer here is Ryan Alexander, opinion contributor.

[Did Trump Pull a Fast One on the Spending Bill?, by Rush Limbaugh, RushLimbaugh.com, March 26, 2018] 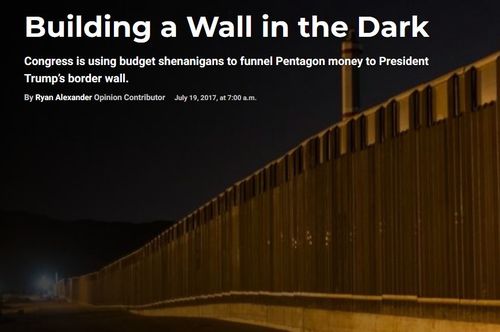 The US News and World Report column lamented a budgetary maneuver by Republicans in support of wall and fence spending in the Continuing Resolutions of 2017:

An amendment was offered by Republican Reps. Steven Palazzo and Trent Kelly from Mississippi (which has coastline but no land border) to strike Section 1039. That means Pentagon money could be spent to construct a border wall. In the normal process of things, this amendment would have been accepted by the Rules Committee and then debated and voted on by the full House of Representatives. But nothing about this amendment can be called normal.

The Rules Committee took this one amendment and labeled it, "proposed to be adopted." In the arcana of House rules, this means that voting for the rule governing consideration of the bill was also voting for this amendment. This is known as a "self-executing rule…”

On the House floor, the vote on the full rule passed. And at the end of a long and exhausting day (and story), that means Pentagon money can be used to construct a border wall. Talk about governing under the cover of darkness.

Alexander lamented this arcane maneuvering as if it were the product of Satan himself. But that’s just sour grapes disguised as a threat to the Republic.  It’s a legitimate (if unusually brave) push back by Congressional GOP.

The real threat to the Republic is mass illegal immigration—and Alexander is just worried that being that the wall might work.

Here’s Dick Morris making a similar but even broader point to Rush (and me):