The liberal media loves to rant on about President Trump’s rude behavior, remarks and tweets — and admittedly he does have his impolite moments.

But the MSM has a short memory, forgetting arguably the most offensive president of them all — Lyndon Johnson.

I recently saw the new film LBJ which included some of Johnson’s well documented vulgarities. An early scene showed him phoning a tailor, instructing him to leave plenty of room for Johnson’s enormous plumbing. Even the trailer included a scene of LBJ conferring with aides while taking a crap (1:12):

Now the coarseness of Johnson was part of the film’s narrative as a story of redemption: the rough Texan coming to embrace President John Kennedy’s Civil Rights bill after the assassination.

Still, LBJ’s crassness was all true, and we would probably know a lot more if he had lived during a time of social media and a nosy press. Richard Nixon observed, “People said my language was bad, but Jesus, you should have heard LBJ.”

LBJ was known for the “Johnson Treatment” — physical bullying to get his way. 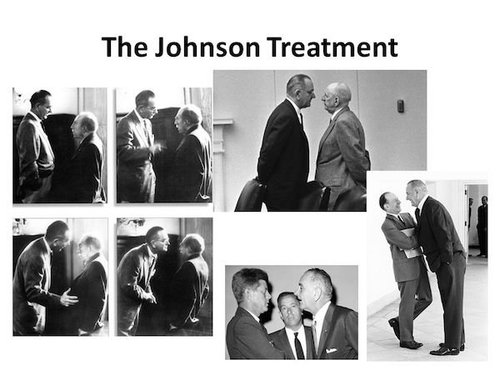 A Google search for Vulgar Lyndon Johnson pulls up a variety of fascinating anecdotes, including a descriptive book review:

Near the beginning of this 1,100-page biographical tome – which covers the 12 years that Lyndon Johnson spent in the US Senate (1949-61) – the reader is offered an unforgettable image of the big Texan giving dictation to a nervous female secretary while he urinates in a corner washbasin. Apparently, such moments at his Capitol Hill office were not uncommon and were observed by several people. The scene “was startling to those who witnessed it”, his earnest biographer blandly notes. 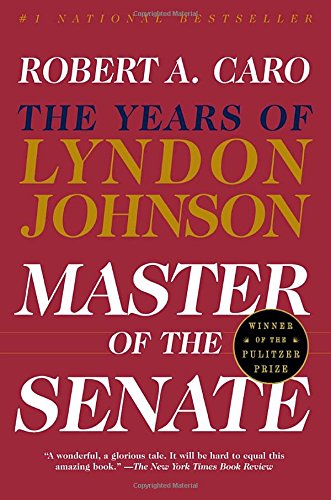 Away from the spotlight, LBJ had the manners of a barnyard dog and enjoyed shocking his subordinates, whom he bullied mercilessly. Like most bullies, he was a coward at heart who used flattery and evasion to dominate more powerful foes, reserving his insults and tantrums for lesser folk. If one of his underlings did not jump fast enough or high enough, he shouted obscenities and threw things. He demanded absolute devotion, declaring, “I want someone who will kiss my ass in Macy’s window and stand up and say, ‘Boy, wasn’t that sweet!’ ”

Women were for sex and servitude. His shy, unglamorous wife, Lady Bird, was more of a maid than a mate, serving him breakfast in bed every morning and entertaining his cronies with huge meals prepared at short notice. At dinner parties he would say, “Bird, get me another piece of pie!”, and if she hesitated more than a few seconds, he would repeat his demand in a deafening roar.

At his Senate office, his female workers were fondled, ogled and overworked. Though his own figure was flabby, he was quick to berate any of his “girls” who put on weight. He wanted to make sure the view was good when they walked away from his desk. “I don’t want to look at an Aunt Minnie. I want to look at a good, trim back end.”

He boasted of his sexual prowess and had long affairs with at least two women, as well as casual flings with members of his staff. Robert Caro, who is a dogged researcher, has uncovered the story of LBJ’s previously secret relationship with Helen Gahagan Douglas, one of the few congresswomen in Washington during the 1940s. A former actress, she was an attractive blonde whose political career came to an abrupt halt after she failed to join her lover as a member of the Senate. In a dirty campaign for an open seat in California, she was defeated by a Republican newcomer who spread rumours that she was a Communist sympathiser. His name was Richard Nixon.