Apparently candidate Romney has figured out that the American people want immigration to be legal and controlled, with no rewards for lawbreaking. (It’s disappointing that other major Republicans like Newt Gingrich and Rick Perry are clearly riding the Hispander amnesty train.)

A recent mailer from Romney’s Iowa campaign has a more acceptable message, one of workplace and border enforcement: 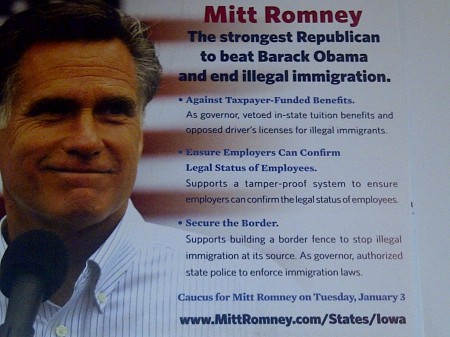 It was an Iowa Senator, Charles Grassley, who said about immigration anarchy: “If you reward illegality, you only get more of it,” a statement which may well reflect Midwestern common sense, to which Romney is appealing.

Presidential candidate Mitt Romney has several mailers in Iowa that talk up his electability and prowess on various issues – his first batch of campaign advertising here this election cycle.

One that arrived in Iowa mailboxes Saturday stresses his opposition to abortion and same-sex marriage, as The Des Moines Register first reported.

Another touches on illegal immigration, a problem that Iowa conservatives feel strongly about.

The touchy topic hurt rival GOP candidate Rick Perry when he said during the Sept. 22 GOP debate that critics of his Texas law granting in-state tuition for illegal immigrants don’t “have a heart.” Perry, the governor of Texas, later apologized.

And the issue resurfaced in headlines in the past week when candidate Newt Gingrich said during the Nov. 22 debate that “I’m prepared to take the heat for saying let’s be humane” and allow some illegal immigrants to stay legally in the United States. Iowa conservatives are wrestling over whether that would be amnesty or not. Gingrich says it’s not – because they wouldn’t get citizenship, but a “path to legality.”