Even Refugee Do-Gooders Get the Blues

The New York Times reports that a stalwart refugee welcomer, the mayor of Manchester NH, is getting tuckered out with the flood of newbies with the gimmes. After taking in more than 2100 Somali, Sudanese and other diverse refugees into the city (pop. 109,000) in the last decade, Mayor Ted Gatsas wants to call a time-out.

The Times takes pains to note that refugees are legal immigrants, and the mayor is not one of those crazed xenophobes who think there oughta be a limit somewhere.

Interestingly, Mayor Gatsas was complaining in March of 2010 about problems the city had with refugees, so this story is not entirely new news. (See Refugee Resettlement Watch’s report: Manchester, NH mayor wants refugee agency to consult with local government.)

Below, Bhutanese refugees receive instruction about how to put free comestibles into boxes at the Manchester food bank. 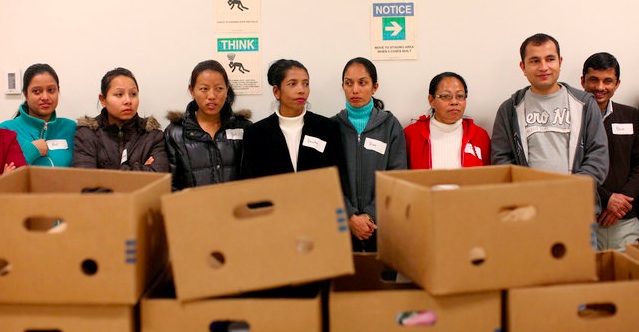 After Taking In Refugees for Years, a New Hampshire City Asks for a Pause, New York Times, November 26, 2011

MANCHESTER, N.H. — This city has long been a resettlement site for refugees, sent here by the State Department for a chance at a better life. More than 60 languages are spoken in the school system, with Somalis, Sudanese, Iraqis and other recent arrivals mixing with children whose ancestors came from Quebec to work in the mighty textile mills along the Merrimack River.

But this year, after decades of taking in refugees, Manchester said, “Enough.”

In a highly unusual move, Mayor Ted Gatsas and the city’s Board of Aldermen asked the State Department in July to halt resettlements here for now. A tide of more than 2,100 refugees over the last decade — most recently, Bhutanese families coming from camps in Nepal — has been more than the city of 109,500 can assure jobs and decent housing for, Mr. Gatsas said.

“We’re just saying, ‘Let us catch our breath,’ ” he said last week in an interview at City Hall. “This is about giving people the opportunity for a better life, and until I can get that person working and gainfully employed and getting to learn the language, I can’t do that.”

The mayor, a Republican who just won a second term, says he has nothing against refugees. His problem is with the International Institute of New England, a nonprofit agency based in Boston that brings them to Manchester and helps them adjust for several months, providing cash and other assistance.

Mr. Gatsas, a former businessman whose grandfather immigrated here from Greece a century ago, said the institute had consistently refused to seek the city’s advice, most recently on its plan to bring 300 more refugees to Manchester in the current fiscal year.

His effort to stanch the flow of newcomers from other countries is different, of course, from the battles raging against illegal immigration in other corners of the nation. Refugees come here legally, through a carefully planned process that brings them from hard-luck camps in some of the world’s most troubled regions to some 200 cities and towns where local nonprofit groups help them settle in.

Two other cities have restrictions in place, according to the State Department: Detroit, where refugees can be resettled only if they have friends or family there already, and Fort Wayne, Ind., where only refugees with close relatives there can go. But while others have raised concerns about resettlement during the economic downturn, none have asked to stop it altogether, said Larry Bartlett, director of the State Department’s Office of Refugee Admissions.

“It’s very rare,” Mr. Bartlett said of Manchester’s request. “Despite the challenges that accompany refugee resettlement and helping people remake their lives, I think it’s such a core national value that communities find a way to continue even despite the poor economic times or other problems they may be experiencing.”

For the International Institute, which has been resettling refugees in New Hampshire for decades, the moratorium request came as a shock, said William J. Gillett, chairman of the agency’s board. Although the agency has resettled 844 refugees in Manchester over the last three years — almost as many as the 984 it has resettled in Boston, a city with almost six times as many residents — there has been no indication of trouble, he said.

“We did not believe the numbers we were suggesting were in any way inappropriate,” Mr. Gillett said. “We didn’t see any evidence of undue strain on city resources.”

Although refugees are also resettled in other New Hampshire cities, including Concord and Nashua, far more come to Manchester, the largest city in northern New England, because it has more jobs, affordable housing and public transportation.

“It’s one of the most fabulous places in the world to resettle,” said Carolyn Benedict-Drew, the institute’s president and chief executive.

But the institute admits that affordable apartments have sometimes proved unacceptable. In 2009, a bedbug infestation at a former mill building that houses refugees grabbed headlines and raised awareness of the squalid conditions some were living in. Patrick Long, a Democratic alderman who voted for the moratorium, said the institute “just wasn’t there to help” with the bedbug problem, which led to a city task force that came up with recommendations for improving refugee housing, education and other needs.

“The apartments they were putting them in were shabby,” he said, “and their employment numbers were misleading.”

On housing, Mr. Gillett said, “We do the best we can within the price constraints we have.”

The institute says most refugees who are capable of working land jobs relatively quickly. But that number is misleading, Mr. Gatsas said, because it includes seasonal jobs that might last only a few weeks or months. And while Manchester used to have plenty of work for people who did not speak English, he said, those jobs are harder to find as the economic base shifts from manufacturing to high tech. A meatpacking plant that used to employ refugees closed in 2004, and a manufacturing company that employed others in nearby Merrimack closed soon after.

And with state and federal budgets being cut ever more sharply in the downturn, Mr. Long said, there is less aid to refugees than ever.

“We’re just starting to see more needs with the new arrivals,” he said. “As the years go by we’re going to be seeing a lot less federal money, a lot less state money, so what do we do? We take a proactive step now, so three, four, five years from now we’re not saying, ‘We’ve got 1,200 people who are out on the street.’ ”

Mr. Long and Mr. Gatsas said a number of refugees had expressed support for a moratorium. But in interviews last week, while several did express concerns about the job market and housing conditions, most said the proposal was upsetting. Some, like Hari Niroula, 25, who arrived here last month, said they had relatives still languishing in refugee camps and feared they would be blocked from coming to Manchester.

Suraj Budathoki, a Bhutanese refugee who came here in 2008 after 18 years in a refugee camp, said that while refugees might struggle in Manchester, life here was preferable to the conditions they put up with in camps.

“I stayed in a camp and I know every single minute there is terrible,” he said. “The life here in Manchester is far better, 110 percent better, than the life in a refugee camp.”

Mr. Bartlett said that after hearing the city’s concerns, his office had decided to send some 200 refugees to Manchester this fiscal year, which began Oct. 1, instead of the 300 proposed by the International Institute. While the State Department often tinkers with the numbers proposed by resettlement agencies, he said, “this was probably a more significant reduction than we would normally make.”

A moratorium would make no sense, he said, partly because virtually all refugees scheduled to arrive in Manchester this year have family here and would likely end up in the city even if they were initially sent somewhere else.

Meanwhile, leaders of the International Institute said they would try harder to work with the city. Michael McGandy, who started in March as the institute’s site manager in Manchester, said high staff turnover and the intense demands of helping refugees over their first three months had perhaps kept the agency from communicating with the city as much as it should.

“We could do a better job with outreach to the community and dispelling myths and making sure people know the facts,” he said.

But Mr. Gatsas said that he was not pleased with the compromise and that he would persist with another tactic: lobbying the state’s Executive Council, which disburses federal money, to table grants for some of the institute’s programs. Should that fail, he said, Mr. Gatsas might try to rally mayors in other resettlement cities to his cause. He has made a point of describing the situation to the Republican presidential candidates who have filed through his office in recent months in hopes of drawing more attention to it.

“If we don’t get the outcome we’re looking for, trust me, I might have a few hundred of them up here to have that discussion,” he said. “I think people will tell you I’m pretty tenacious on an issue. I’m not going to stop.”