You know what? I haven't done enough to promote diversity lately. It's time for me to RT some "cracka ass." Brace yourselves.

White people gotta accept that minorities will no longer be minorities & it's their cracka ass turns. My mom been hip, she made me. — Dr.Spencer HAZE Reid (@DayHaze) January 14, 2015

If I saw this cracka I'd sit on her skinny white ass till she pass out pic.twitter.com/zcx9R8YT84

Sure, calling blacks articulate is racist, but calling them out on inarticulacy is racist, too.

Homophobia is as common in the black community as hatred of whites.

Now I'm being followed by some creepy ass cracka

This is what Trayvon Martin told his friend Rachel Jeantel shortly before his murderous (and possibly homophobic) attack on George Zimmerman.

@desusnice @Gawker What does that even mean? Is it open season on a cracka ass? — Will Yams (@garethkhaleel) January 13, 2015

Actually, no. It's a billboard opposed to white genocide.

@swagman3hunna I almost flipped my desk on this bitch ass cracka

DylanE's white professor mispronounced his name. And finally there's this:

I got this cracka ass @rsmccain tweetin bout me! U don't know me MFer.... Take yo cracka ass on up outs my mentions — Vinita Hegwood (@IBeVinitaMFers) January 15, 2015

I think that may be a white person parodying the Vinita Hegwood who resigned from a high school teaching job over a tweet—the @IBeVinitaMFers twitter account says "I be a cracka hatin teacha yo. I be teachin english n sh*t. Dis is a pairodee thang too".

Here's the news story about Hegwood

Update: Duncanville ISD high school teacher resigns over ‘impulsive’ tweet before school board can fire her

Here's the real Tweet from Vinita Hegwood—not a Duck Dynasty fan, on which the Dallas News has erased some words. (Which I was unable to do from the embedded tweets above, sorry, but this is what's out there.) 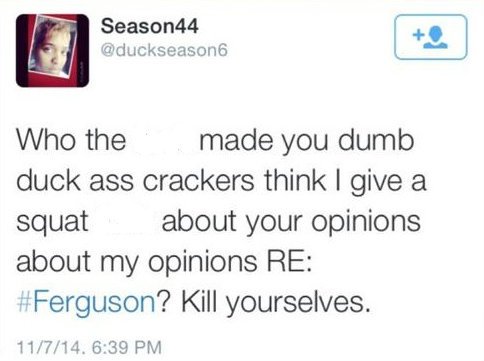 But given what McCain dredged up from real blacks with a simple Twitter search, I don't see the point of having a parody account.