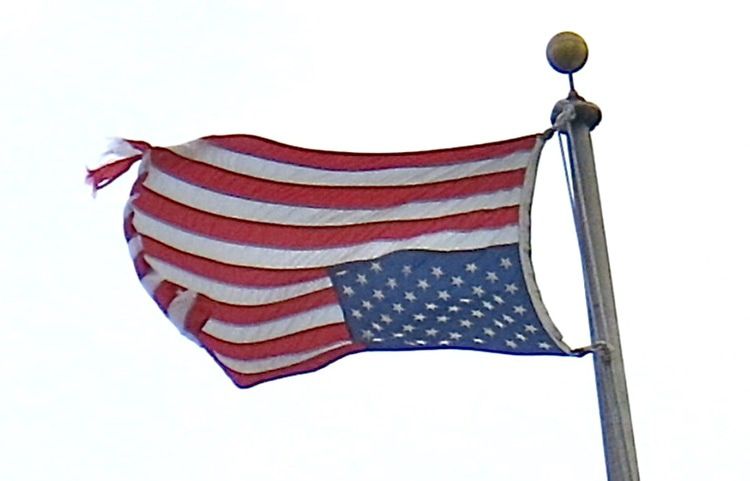 Robert Epstein's Warning: Big Tech Can Move 15 Million Voters to the Left in 2020

On Tuesday, Tucker Carlson discussed the threat of the leftist Big Tech establishment to having a free and fair election. As psychologist Dr. Robert Epstein has shown, Google in particular works to shape public opinion around political issues and candidates to affect voting. His unique research indicates that Google Search has deliberately influenced voters to favor Democrats. 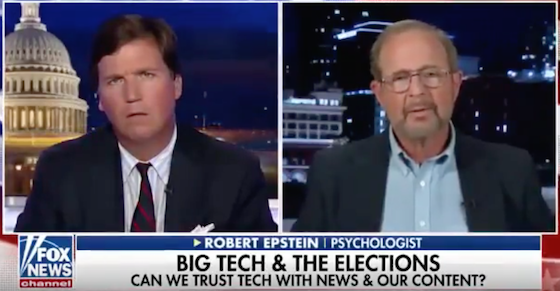 Dr. Epstein now believes that left-wing Big Tech can nudge 15 million to the Democrats in 2020 by slanting search results, with nobody aware that it is happening. Yet Republicans are asleep at the switch while Silicon Valley enemies plot GOP doom and the destruction of representative government.

Big Tech’s secret propaganda is a serious threat to our freedoms continuing, but there is little attention from concerned parties. That needs to change.

TUCKER CARLSON: Back in America, a tech story that might seem insignificant, but is not. In fact, it may determine what happens in the next presidential election; it very well may. A Google whistleblower has come forward to describe his company’s plans to remake the American political landscape. Google, of course, is the most powerful company in the world.

So when an anonymous whistleblower comes forward, in this case, telling Project Veritas that Google is using internal algorithms to shape what Americans see online, and by extension, what they think, you better take it seriously:

UNIDENTIFIED MALE: Fairness is a dog whistle, it does not mean what you think that it means and you have to apply doublethink in order to understand what they’re really saying.

What they’re really saying about fairness is that they have to manipulate their search results, so it gives them the political agenda that they want, and so they have to re-bias their algorithms so that they can get their agenda across.

CARLSON: That’s the definition of propaganda, again, being perpetuated by the single most powerful company in the history of the world.

This is not surprising to viewers of this show, James Damore was fired for Google for his political views, his totally conventional, moderate political views and then came on this show to describe the culture at Google. Watch this:

JAMES DAMORE: There are definitely some political biases within Google that I was trying to shed light on in the document, and that they affect many parts of the business and for example, who they do business with, and what type of content they create, and I really think that those political biases need to be addressed.

CARLSON: It’s not just whistleblowers — excuse me, hidden camera footage obtained by Project Veritas shows a conversation with a woman called Jen Gennai. Her Google title is Head of Responsible Innovations in the Global Affairs Department.

In that video, Gennai says that Google is working specifically on products to make certain that Donald Trump does not win another election. Quote, “We’re also training our algorithms like if 2016 happened again … would the outcome be different? People were not putting that line in the sand … that they were not saying that what’s fair and what’s equitable, so we’re like, well, we’re a big company, we’re going to say it.”

In other words, we’re going to try and affect the outcome of the 2020 presidential campaign. Gennai goes on to blast Elizabeth Warren’s proposal to break Google up into two companies. Why? Check out this reasoning, quote, “All these smaller companies who don’t have the same resources that we do will be charged with preventing the next Trump situation. It’s like a small company cannot do that.”

So using a company’s dominance on the internet to sway the outcome of an election. That’s their plan. There should be a term for what Gennai is describing. It turns out there is a term, it’s a term you’ve heard constantly from talking heads on television for more than two years. It’s called hacking an election. Google wants to hack our election. They’re saying that out loud.

As we’ve been told over and over again by CNN and the Washington Post and the New York Times and all the other propagandists. Hacking an election is very bad; at minimum it warrants a multiyear investigation by law enforcement agencies. And yet, it’s happening now.

The Washington establishment has said they want to prevent election interference. But of course, that’s a lie. They just want to make sure they control the elections. That’s their only goal. That’s why they’re not attacking the real source of election interference, which is Silicon Valley.

Google, Facebook and their ilk, they have far more political power than Russia ever has or ever will have. No serious person doubts that.

But the people in charge of our country don’t care about any of that. Because when Google meddles in an election, Democrats benefit.

By the way, if you want to find that video, you can’t access it on YouTube. Google took it down. That’s not surprising. You can already be tossed off of YouTube and Facebook if you decide they’re using speech they don’t, like they’ll accuse you of hate speech, whatever that means.

Now they can toss you off their sites just for putting up videos that make you look bad. They probably won’t be banning any DNC videos anytime soon, you can be certain of that.

Meanwhile, this week, Ravelry, a knitting social networking website with eight million members banned all explicit support for Donald Trump and only for Donald Trump, and they got away with it. And because they have gotten away with it, other platforms almost certainly will do the same thing.

All of this is going on flagrantly in public, but most Republicans haven’t even responded to it. They haven’t reacted at all.

As soon as the 2016 election was over, the press and Big Tech openly began plotting on how to control the narrative in 2020, which is another way of saying control the election outcome in 2020, and using the scapegoat of fake news as an excuse to control the public discourse.

Republicans were in charge of Congress at the time; they did nothing. The White House commands a vast regulatory apparatus. They’ve sat motionless and done nothing. The only Republican is seems even interested at all in the subject and keeping Big Tech in check at all is new senator Josh Hawley, he just introduced a bill that would force tech companies to act as genuinely open platforms in order to receive valuable regulatory benefits. That’s the deal. They’re violating the deal, nobody else seems to care.

Passing Hawley’s bill does not seem to be a conservative priority, though, no one in Congress is talking about it. That’s a big mistake.

Successful political parties look out for their supporters and for the public at large and protect them from harm. Republicans, meanwhile, are sitting in a stupefied fog of libertarianism, doing nothing while their ideas are suppressed, and their supporters are silenced.

One day, they’ll look up and find they have no supporters at all; who will be the blame for that? Only themselves.

Dr. Robert Epstein is not a Republican, but he is the preeminent researcher into the subject. He’s a senior research psychologist at the American Institute for Behavioral Research and Technology, and he is again, the world’s great expert on the effect of the tech companies on political discourse. He joins us today. Dr. Epstein, thank you very much for coming on.

CARLSON: Seeing this video tape, reading the quotes from this Google executive, does this confirm what you’ve said in the past? Are you surprised by this? What’s your response?

EPSTEIN: I’m not surprised, in the least. It confirms in glowing terms, or in very ugly terms, if you want to look at it that way, that Google not only has the power to shift opinions and votes on a massive scale, but they exercise this power and this is what I measure in my research.

CARLSON: So why is that not hacking an election?

EPSTEIN: Well, it’s not hacking an election right now because Google and similar companies like Facebook are completely unregulated in the United States, so they can do whatever they please.

And if they all work together in 2020 to support the same presidential candidate, which is very likely, and probably it’ll be a candidate that I support, by the way, they can shift upwards of 15 million votes with no one knowing that they’ve been manipulated and without leaving a paper trail for authorities to trace.

CARLSON: So that’s it. There’s no election at that point. Our democracy is not real if that’s allowed to happen, correct?

EPSTEIN: Well, democracy becomes an illusion. Now, there are actions one can take. I’ve set up so far, the only two big monitoring systems that anyone has built to actually look over people’s shoulder as they’re doing election related online activities, and to aggregate that information and see what they are being shown by these big companies.

Now in 2020, I’m actually trying right now to raise funds to build a large scale monitoring system to keep an eye on these companies and to catch them in the act, literally catch them, when they are manipulating votes and opinions. And in my opinion, that’s the only way we can stop them. There are no laws in place that can stop them at the moment.

CARLSON: Calling attention to it might be the first step and you’ve done more than anyone to do that. Dr. Epstein, thank you very much.