Rise of the New Mulatto Elite — Even in the NBA

For a couple of years, 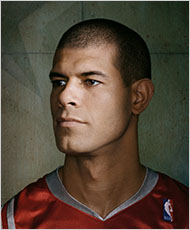 I've been pointing out that because African-American culture has become so narrow and inward-looking, it's now having a harder time producing high achievers outside of Officially Black fields such as basketball, football, and some forms of entertainment. Thus, the black race is increasingly represented at the top of many categories by half-black individuals (typically raised by white mothers or white maternal grandparents). Barack Obama is only the most obvious example of the rise of this New Mulatto Elite. (In contrast, the Old Mulatto Elite, such as Frederick Douglass and Booker T. Washington, generally had white ancestors in the paternal line.)

Now, Michael Lewis (author of Moneyball on the impact of Bill James-style statistics on baseball) has a New York Times Magazine article, "The No-Stats All-Star," on Shane Battier, a Houston Rockets NBA player whose contributions to winning only appear in the newest and most sophisticated basketball statistics. In all the old basketball statistics, he just looks like a slow, not very springy player with a white mom. (Here's a video of Battier singing a country song in a karaoke bar.) But the Rockets brain trust gives him (and nobody else on the team) all their super-sophisticated stats and he digests them before each game to understand how to shut down the opponent's best player, such as Kobe Bryant of the Lakers.

Lewis's article is a bit contrived in that he skips over mentioning that Battier is different from most NBA stars in that he spent four years in college, at Duke, learning how to play from Coach K. Also, in college he was a superstar by his senior year, winning all the awards as player of the year, so the new stats weren't necessary to distinguish his contributions at the college level. As Yogi Berra said, "Sometimes you can observe a lot just by watching." The question was always whether his lack of athleticism would prevent him from playing an important role in the NBA. That's where the new stats help.

Wetzel watched this kid, inundated with offers of every kind, take charge of an unprincipled process. Battier narrowed his choices to six schools – Kentucky, Kansas, North Carolina, Duke, Michigan and Michigan State – and told everyone else, politely, to leave him be. He then set out to minimize the degree to which the chosen schools could interfere with his studies; he had a 3.96 G.P.A. and was poised to claim Detroit Country Day School’s headmaster’s cup for best all-around student. He granted each head coach a weekly 15-minute window in which to phone him. These men happened to be among the most famous basketball coaches in the world and the most persistent recruiters, but Battier granted no exceptions. When the Kentucky coach Rick Pitino, who had just won a national championship, tried to call Battier outside his assigned time, Battier simply removed Kentucky from his list. ...

Battier, even as a teenager, was as shrewd as he was disciplined. The minute he figured out where he was headed, he called a sensational high-school power forward in Peekskill, N.Y., named Elton Brand – and talked him into joining him at Duke. (Brand now plays for the Philadelphia 76ers.) ”I thought he’d be the first black president,” Wetzel says. ”He was Barack Obama before Barack Obama.”

Last July, as we sat in the library of the Detroit Country Day School [tuition = $24,240], watching, or trying to watch, his March 2008 performance against Kobe Bryant, Battier was much happier instead talking about Obama, both of whose books he had read. (”The first was better than the second,” he said.)

Battier has good literary taste, too.

When he entered Detroit Country Day in seventh grade, he ... was also the only kid in school with a black father and a white mother. Oddly enough, the school had just graduated a famous black basketball player, Chris Webber. Webber won three state championships and was named national high-school player of the year. ”Chris was a man-child,” says his high school basketball coach, Kurt Keener. ”Everyone wanted Shane to be the next Chris Webber, but Shane wasn’t like that.” Battier had never heard of Webber and didn’t understand why, when he took to the Amateur Athletic Union circuit and played with black inner-city kids, he found himself compared unfavorably with Webber: ”I kept hearing ”He’s too soft’ or ”He’s not an athlete.’ ” His high-school coach was aware of the problems he had when he moved from white high-school games to the black A.A.U. circuit. ”I remember trying to add some flair to his game,” Keener says, ”but it was like teaching a classical dancer to do hip-hop. I came to the conclusion he didn’t have the ego for it.”

Battier was half-white and half-black, but basketball, it seemed, was either black or white. A small library of Ph.D. theses might usefully be devoted to the reasons for this. For instance, is it a coincidence that many of the things a player does in white basketball to prove his character – take a charge, scramble for a loose ball – are more pleasantly done on a polished wooden floor than they are on inner-city asphalt? Is it easier to ”play for the team” when that team is part of some larger institution? At any rate, the inner-city kids with whom he played on the A.A.U. circuit treated Battier like a suburban kid with a white game, and the suburban kids he played with during the regular season treated him like a visitor from the planet where they kept the black people. ”On Martin Luther King Day, everyone in class would look at me like I was supposed to know who he was and why he was important,” Battier said. ”When we had an official school picture, every other kid was given a comb. I was the only one given a pick.” He was awkward and shy, or as he put it: ”I didn’t present well. But I’m in the eighth grade! I’m just trying to fit in!” And yet here he was shuttling between a black world that treated him as white and a white world that treated him as black. ””Everything I’ve done since then is because of what I went through with this,” he said. ”What I did is alienate myself from everybody. I’d eat lunch by myself. I’d study by myself. And I sort of lost myself in the game.”

Losing himself in the game meant fitting into the game, and fitting into the game meant meshing so well that he became hard to see. In high school he was almost always the best player on the court, but even then he didn’t embrace the starring role. ”He had a tendency to defer,” Keener says. ”He had this incredible ability to make everyone around him better. But I had to tell him to be more assertive. The one game we lost his freshman year, it was because he deferred to the seniors.” Even when he was clearly the best player and could have shot the ball at will, he was more interested in his role in the larger unit. But it is a mistake to see in his detachment from self an absence of ego, or ambition, or even desire for attention. When Battier finished telling me the story of this unpleasant period in his life, he said: ”Chris Webber won three state championships, the Mr. Basketball Award and the Naismith Award. I won three state championships, Mr. Basketball and the Naismith Awards. All the things they said I wasn’t able to do, when I was in the eighth grade.”

”Pretty much everyone,” he said.