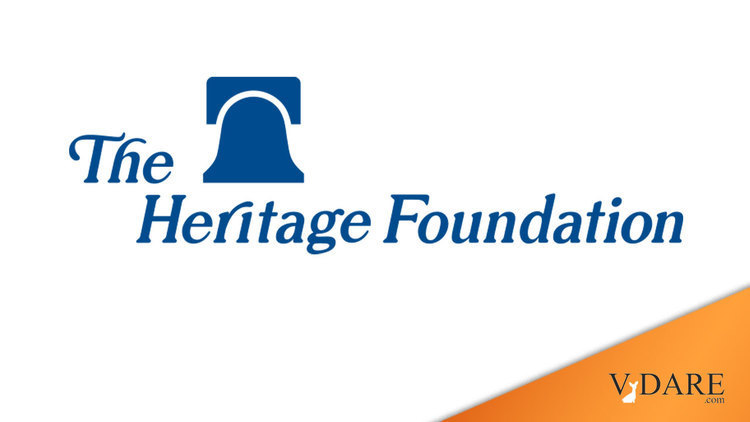 Richwine's "Resignation" And The Cowardice Of Conservatism, Inc

Interestingly, before this resignation, there were real signs of resistance within the Conservative Movement to the usual PC bullying. Michelle Malkin contributed a typically gutsy column enthusiastically defending Richwine. Ann Coulter slammed the anti-science left. Most importantly, Rush Limbaugh launched an extended discourse defending Richwine and his work and criticizing the “RINO's” calling for his resignation.

However, the Heritage Foundation itself ran shrieking for cover from the moment it began. It embarrassingly searched for public relations flacks to help them explain away the controversy. It refused to clarify whether it had actually read Richwine's dissertation before it hired him – which at the least suggests utterly incompetent human relations policies. Finally, it stuck its head in the ground regarding the resignation itself, muttering tersely that they don't comment on internal personnel policies.

As Talleyrand said, it's worse than a crime – it's a blunder. Forcing or even allowing Richwine to resign is an admission of guilt. Tactically speaking, not only should Jason Richwine not have been pressured to resign, he should have been forbidden to resign.

Richwine was not being criticized for anything he wrote at the Heritage Foundation, or even about the most recent immigration study. While there has been some pushback from within conservatism against that study, it mostly consists of the claim that the study assumed today's illegal immigrants would not move into the upper class economically. Of course, if anything, the descendents of today's illegal immigrants are likely to regress in future generations, and welfare use is likely to increase behind today's standards.  Once illegals are given citizenship, the permanent progressive majority that Democrats recognize and Grover Norquist and his minions pretend to ignore will finish off the cause of limited government forever.

However, this isn't what cost Richwine his job. Richwine lost his job because of a dissertation approved at that bastion of white racism and right wing hysteria, Harvard University. It was reviewed by three scholars, including progressives of note, at perhaps the most prominent and prestigious university in the world. It is empirically based, intellectually sound, and, as can never be repeated enough, well within the mainstream of all reputable literature on the subject of race and IQ. Most importantly, it was written years before Richwine obtained his job, and served as the dissertation that earned him his PhD. It wasn't some work that he was doing on the side – it was the very thing that qualified Richwine for his position at the Heritage Foundation.

By even allowing Richwine to resign, the Heritage Foundation confirms what leftists think about conservatives. They are all racist, but only insofar as no one points it out. Once they are identified, they run for cover, because they do not have the actual courage of their convictions. Simultaneously immoral and cowardly, hateful and hypocritical, conservatives are small, selfish, petty men. Luckily, they can be stopped – through force, intimidation, and mob tactics, which break them every single time.

Conservatism Inc. is not made up of shameless, deracinated political hacks. I desperately wish they were. They are simply bad at politics. They are not even intellectually capable of imagining an alternative to defeat.