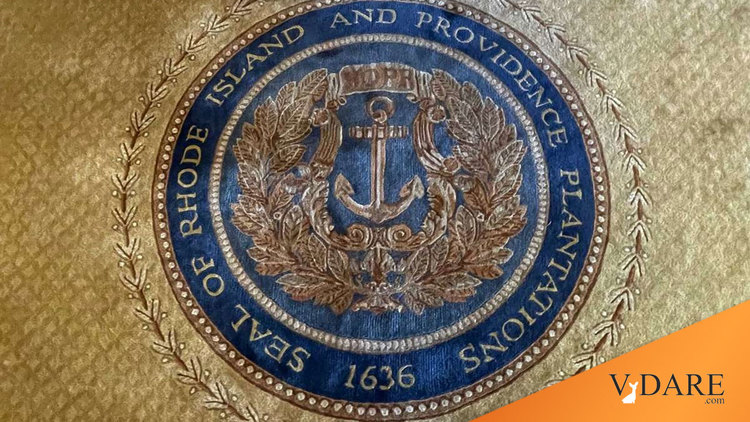 Most of you probably remember the video from July 22, 1979 of a cigar chomping Saddam Hussein, during a meeting of the Command Council in 1979. As Saddam read names from an enemy list each once stood up and was unceremoniously escorted out of the room for execution or mock trials.

I couldn't help but think of that video as I watched this one: "Rhode Island teachers fired". As reported earlier on VDARE.com, there has been a mass teacher termination in Rhode Island.

If you are like me you probably haven't heard of Central Falls, RI. The city website has a message that signals that the city is in the middle of a siege, and feels the need to appease:

While the past history focuses on the building of mills and the growing population. The City's recent history focuses on the immigration of many people of Latin American decent. Like the people who arrived before them, these new immigrants have found a home in Central Falls. Many are bringing new flavor and culture to an eth[n]ically rich community.

Anderson Cooper on CNN ran a story about what is going on. The broadcast version also had an interview with a George McLaughlin, a teacher who told the opposing side of the story. It's very odd that CNN would edit out his interview for the online clip — maybe McLaughlin did too good of a job explaining things from the teacher's perspective. There was a second video report by Randi Kaye, and although there was a short statement by a teacher the lion's share of the time was devoted to talking about the very high salaries of the teachers and their unwillingness to do a little extra work.

Those Rhode Island teachers are being set up big time. It's a very sad scenario, but as I will explain the teachers are their own worst enemies — and there is nowhere they can turn for help.

It all started when Superintendent Frances Gallo demanded that the teachers raise the test scores of students at Central Falls High School. Somehow the teachers managed to raise scores by as much as 7%, which is an admirable accomplishment considering that 67% of the students are Hispanic and many of them don't speak English. Of course the teachers were doomed to failure because they were trying to educate students who are most likely illegal aliens, gang members, and kids who come from Hispanic families that all too often put no value on the merits of education.

Not surprisingly there was nothing the teachers could do that would be good enough for Superintendent Gallo, who anxiously awaited the day she would have an excuse to scapegoat the teachers for everything that is wrong with the schools. It's quite amusing to listen to Gallo's claim that she had absolutely no choice but to fire the teachers.

The firings take effect at the end of the academic year. No more than half the staff can be rehired under such turnarounds, according to US Department of Education guidelines for $3.5 billion in School Improvement funds distributed to the states.
"All teachers fired at R.I. school. Will that happen elsewhere?", Christian Science Monitor , February 25, 2010:

The answer to the question in the title of the CSM article is quite easy to figure out. What will happen elsewhere is what is now happening in Rhode Island because that's what has already happened before in school districts like Washington DC. It's a scorched earth policy to conquer and reform public schools and to start more charter schools. The idea was initiated by President Bush's "No Child Left Behind". Obama's program is similar to Bush's but is called "Race to the Top".

So, is there any hope for these teachers? If the Washington DC massacre by Michelle Rhee is any example, the outlook for the RI teachers is beyond bleak. Sure, they will protest and squawk, but it will be to no avail. Soon their their voices will be drowned out by new Spanish speaking teachers and jubilant parents that no longer have to worry about their kids being required to learn English.

Large groups of teachers managed to stage public protests (video at WCVB Boston) but their activism is unlikely to save their jobs — it didn't in Washington DC. Too little, too late!

Ultimately Superintendent Frances Gallo will win, and that means that most of the fired teachers will be replaced by younger and cheaper teachers that speak Spanish. They will be from countries like Mexico or the Philippines. Most of the Spanish speaking teachers will already live in the U.S. or will be imported to Rhode Island through bodyshops that use H-1B and TN (Trade NAFTA) visas.

The jobless teachers will find that there is nobody to turn to for help — not even themselves!

Clueless Rhode Island teachers are showing that they are incapable of admitting what the problem is or being able to discuss how to deal with it. The Central Falls teachers put up a website to improve their image. There is a video that may succeed in winning some sympathy, but it doesn't take much time at the web site to see that the teachers cannot deal with the core issues that are wrecking their careers. Take this for example:

A great deal has been reported about the situation at Central Falls High School. The Superintendent of Schools has issued 88 termination letters at the high school - firing the entire teacher faculty - a move that is unprecedented in the United States .....

What is happening in Rhode Island is certainly not "unprecedented" because almost the exact same thing happened in Washington DC! I have several blogs about what happened, start reading "Braveheart In High Heels?

Considering the obliviousness of the Central Falls teachers related to issues in their own profession, they should probably just accept the fact their cause is lost. Soon they will be joining the families of their students in the soup kitchens and welfare waiting lists. Their $70K a year jobs are gone for good POOF! but more than likely they will never figure out why.

Spokespeople for the teachers are equally oblivious. Even though CNN cut out the George McLaughlin interview the Providence Journal provided almost the same thing in text.

McLaughlin points out that Central Falls High School has the most transient student population in the state, the highest percentage of students who don’t speak English and a high percentage of special-needs students. More than 90 percent of students live in poverty. Teachers have to adjust and readjust. And the high turnover in administrators over the last five years has left them wondering what each new day will bring.
"A Central Falls teacher speaks out for his side", Providence Journal, 2/22/2010

Notice that McLaughlin is so fearful of saying that his students are illegal aliens he refers to them as "transients". It has gotten to the point that liberals are afraid to say "undocumented immigrants". Just saying the word "immigrants" is prohibited.

The teachers can't count on the unions for help because they are even more hung up on the immigration issue than the teachers. The unions bungled Louisiana and Washington DC, and you can bet they will do the same in Rhode Island. Go back to that Anderson Cooper interview to watch American Federation of Teachers President Randi Weingarten make a lame attempt at defending the teachers. She claims that 90% of the students are impoverished, which is probably true but beside the point. Conspicuously she never mentions the core issue in that area of Rhode Island — ILLEGAL AND UNCONTROLLED IMMIGRATION! The AFT acts like they are helping the terminated teachers but everything they do is a charade to hide the fact that unions see nothing wrong with our schools being flooded with illegals. The AFT could care less if American teachers are axed as long as they can sign up the new ones to their union.

The teachers better not look to the government for sympathy. Just recently U.S. Secretary of Education Arne Duncan lauded the mass firings.

Meanwhile, state and local education officials received some high-powered support of their own, when U.S. Education Secretary Arne Duncan weighed in, saying he ”applauded” them for ”showing courage and doing the right thing for kids.”
"Every Central Falls teacher fired, labor outraged", Providence Journal, February 24, 2010

In case you are curious who voted to terminate the teachers — the dirty deed was done by the Central Falls School District Board of Trustees. You can see their pictures at the previous Journal link, but just to make it easy here they are with their vote (5-2 in favor):

Perhaps it's just coincidence, but the only "NO" votes were by the only white guy on the board, and a light skinned Hispanic female. Could their voting behavior have been determined by skin color?

As for the teachers: Most of the ones you see being interviewed are older white people. That's probably another coincidence.

You can bet that most of the terminated teachers are uber-liberals that sowed the seeds of their own destruction by voting for President Obama. They are so blinded by liberal ideology they are totally incapable of comprehending what the problem is, much less how to solve it. Obama of course is the one who appointed Secretary of Education Arne Duncan, who according to USA Today praised the district for "doing the right thing for kids."

How, you may ask, do I know that those teachers all voted for Obama? Well for one thing pay close attention to the videos and articles linked from this article that show all the people wearing red shirts. Call them progressives, liberals, or commies, but they all voted for Obama. Even the AFT union endorsed Obama.

If you still have any doubt that the left leaning teachers and their unions are leftists, go to the Central Falls Website to get their address, and then plug the zip code into house.gov to see who their Representative is: Patrick Kennedy. Granted many of the teachers don't live in that district, but you can bet they voted for another horse's ass that's just as bad!

There is some poetic justice about this story: Rhode Island mass firings is a case of uber-liberals throwing other uber-liberals under the bus, which created a big stinking pile of Rhode Kill!