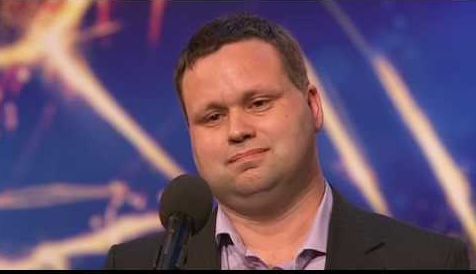 Return Of The New Mulatto Elite

Awhile back, a British TV talent show was won by a dumpy-looking guy named Paul Potts who wowed the crowd by singing Puccini's "Nessun Dorma" aria from Turandot.

Americans don't know anything about opera anymore, so they don't realize how thrilling it can be. (The British viewers were probably vaguely familiar with the aria from the connection between soccer and the Three Tenors, "Nessun Dorma" being more or less Pavarotti's theme song.) So it was only natural for the American Idol-style show "America's Got Talent" to have as the anchorman of their season premiere this week an American contestant singing "Nessun Dorma." Neil E. Boyd, an insurance salesman of Pavarotti-like girth, floored the audience, making him the frontrunner.

I imagine the producers of the show auditioned a lot of part-time opera singers to find the one they were going to anoint as the American Paul Potts. The fellow they came up with, Boyd, is (not too surprisingly) part black, with a white mom with whom he is very close.

A couple of years ago, my wife predicted early in the American Idol season that Jordin Sparks, the daughter of an NFL cornerback and a redhead, would win, since she could sing both black and white.

I think there's a general lesson emerging: whites like blacks, but black teens these days don't like much of anything they consider white. They like just hip-hop and basketball (and, okay, football, too). Almost everything else is considered a violation of keeping it real.

Even though blacks may tend to have a natural advantage at creating resonant vocal tones, the very idea of singing opera is totally off their radar. Sure, there were big time black opera singers like Marian Anderson as far back as between the Wars, but black youths aren't interested in that kind of acting white anymore.

So, the small number of mulattos who grew up with one non-black parent and thus get introduced to a wider range of cultural options beyond rap and hoops are disproportionately taking the plums that people a generation ago assumed blacks in general would be achieving.

Back in 1968, when the top American rock guitarist was Jimi Hendrix and top American tennis player was Arthur Ashe, everybody assumed that integration meant that blacks would continue to show up near the top in an ever wider variety of fields.

Today, though, superstar rock guitarist Tom Morello is the great-nephew of Jomo Kenyatta; and the second best American men's tennis player James Blake has a black father. But they both have white mothers. Similarly, five different black golfers won 23 PGA tournaments between 1961 and 1986, but since then Tiger Woods is the only player of any visible fraction of African ancestry to win a tournament.

There's somebody who's an even better example of this rise of the new mulatto elite, but I can't quite think of his name at the moment.