Tech and business publications routinely chat up the advantages of transitioning away from human workers and into smart machines, but it’s less often that the mainstream press emphasizes the cost saving of companies switching to robots.

It’s interesting then to see a recent edition of the Los Angeles Times cites the savings to be had by replacing restaurant employees with automation — thousands of dollars per month, we read. Flippy the burger robot now is “costing less to employ than a minimum-wage worker.” What business manager wouldn’t take that opportunity?

The robot burger flipper doesn’t mind working the grill 24/7 with no breaks.

So does it make sense for America to continue immigrating millions of low-skilled workers from abroad?

It seems unwise when the builders of technology hope to produce the next big machine, like the Kiva Systems robot company which was bought by Amazon owner Jeff Bezos for $775 million in 2012. The incentives are very enticing for techies around the world to push ahead with robot design. 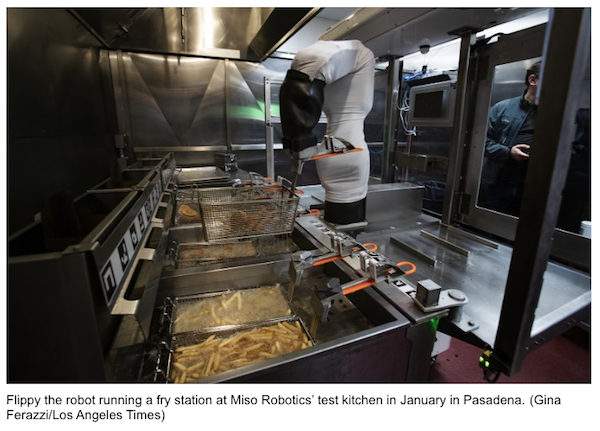 In a test kitchen in a corner building in downtown Pasadena, Flippy the robot grabbed a fryer basket full of chicken fingers, plunged it into hot oil — its sensors told it exactly how hot — then lifted, drained and dumped maximally tender tenders into a waiting hopper.

A few feet away, another Flippy eyed a beef patty sizzling on a griddle. With its camera eyes feeding pixels to a machine vision brain, it waited until the beef hit the right shade of brown, then smoothly slipped its spatula hand under the burger and plopped it onto a tray.

The product of decades of research in robotics and machine learning, Flippy represents a synthesis of motors, sensors, chips and processing power that wasn’t possible until recently.

Now, Flippy’s success — and the success of the company that built it, Miso Robotics — depends on simple math and a controversial hypothesis of how robots can transform the service economy. Costing less to employ than a minimum-wage worker, Flippy is built to slip in right alongside humans on the fast-food line.

Off-the-shelf robot arms have plunged in price in recent years, from more than $100,000 in 2016, when Miso Robotics first launched, to less than $10,000 today, with cheaper models coming in the near future.

As a result, Miso can offer Flippys to fast-food restaurant owners for an estimated $2,000 per month on a subscription basis, breaking down to about $3 per hour. (The actual cost will depend on customers’ specific needs). A human doing the same job costs $4,000 to $10,000 or more a month, depending on a restaurant’s hours and the local minimum wage. And robots never call in sick. (Continues)