It should be easy for Republican Presidential candidates to declare their total loyalty to the Constitution, period. After all, the oath of office requires they swear to defend it:

Given the Tea Party emphasis on the Constitution, the disavowal of less worthy ideologies like communism and Islamic sharia law should not be much to ask, and many might wonder why it is necessary. But Robert Spencer of Jihadwatch.org makes a good case that the Reeps should state clearly that authoritarian sharia law has no place in America.

Our nation is based on the equality of justice under the law, while Islam decrees that male Muslims are superior to everyone else on earth, with mandated mistreatment of lowly infidels and women to keep them in their oppressed place.

Surprisingly, some highly regarded conservative candidates and Republican leaders have disturbing activities on behalf of Islam.

While Texas Governor Rick Perry was widely reported for praying in public, his generosity toward Islam has gotten less attention. In 2003, the Governor helped pass legislation that arguably puts the Texas state government in the position of enforcing Islamic dietary laws, a part of sharia, by making it a criminal offense to sell Halal and non-Halal meat in the same store and mislabeling the items. (See Rick Perry and Islam in the Sultan Knish blog for details.) 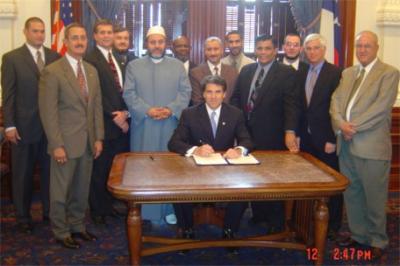 Another conservative favorite is New Jersey Governor Chris Christie, admired in particular for his chainsaw cuts in bloated budgets and straight-talk style. However, he does not believe hostile Islam poses a threat to Western civilization, as increasing numbers of Americans do (including candidate Gingrich). Christie ranted in July, “So this Sharia law business is crap. It’s just crazy.”

In 2010, 70 percent of Oklahoma voters approved a no-sharia initiative, so the electorate of one state doesn’t think the threat is “crap.” Apparently they didn’t believe the liberal propaganda that Islamic diversity was worth celebrating.

Daniel Pipes’ blog has the relevant details: Why Chris Christie Will Never Be President of the United States.

As is often the case, Muslim immigrants are seen by pols as a minority group that needs some special pandering to attract their votes. The politicians hope that their embrace of a hostile and alien ideology will go unnoticed by traditional Americans. Fortunately, the internet doesn’t forget.

With that brief introduction to the scope of the problem, here is Robert Spencer’s article:

Texas Gov. Rick Perry has set many a heart a-flutter by joining the hunt for the Republican presidential nomination, but not so fast:  Hard-Left advocacy journalist Justin Elliott of Salon hailed Perry as the “pro-Sharia candidate,” and exulted that Perry “is a friend of the the Aga Khan, the religious leader of the Ismailis, a sect of Shia Islam that claims a reported 15 to 20 million adherents worldwide.  Sprouting from that friendship are at least two cooperation agreements between the state of Texas and Ismaili institutions, including a far-reaching program to educate Texas schoolchildren about Islam.”

The Ismailis are a peaceful sect, but such educational efforts are unlikely to be honest about the Islamic texts and teachings that jihad terrorists use to justify violence and make recruits among peaceful Muslims.  Nor are they likely to be forthright about Islam’s bloody history of war against and conquest and subjugation of Jews, Christians, Hindus and others.  All that is likely to be whitewashed, especially given Perry’s apparent friendship with Republican power broker Grover Norquist.

David Horowitz wrote years ago that Norquist was working with “prominent Islamic radicals who have ties to the Saudis and to Libya and to Palestine Islamic Jihad, and who are now under indictment by U.S. authorities.”  Norquist is unrepentant and continues to partner with Islamic supremacists.

Also among the presidential hopefuls, albeit as yet undeclared, is New Jersey Gov. Chris Christie, who this year appointed a Muslim attorney, Sohail Mohammed, to a Superior Court judgeship in Passaic County.  Mohammed was the lawyer for Mohammad Qatanani, a Muslim Brotherhood operative who pleaded guilty to membership in the jihad terror group Hamas and the Muslim Brotherhood.  Christie knew this, yet called Qatanani “a man of great good will” and “a constructive force,” and fought Department of Homeland Security efforts to deport him.  When challenged, Christie defended his actions and went out of his way to slam opposition to Sharia in the U.S. as “crap.”

Is Qatanani entitled to legal representation?  Of course.  Should Mohammed’s taking of the case stigmatize him as sympathetic with Qatanani’s pro-jihad views and ties to Hamas and the Muslim Brotherhood?  Certainly not.  But when Christie praises Qatanani as a “constructive force” and fights his deportation despite knowing of his membership in a jihad terror group (Hamas) and the Islamic supremacist group par excellence (the Muslim Brotherhood), and then appoints his lawyer to a judgeship, it becomes clear what is going on here.

Then there is Herman Cain, who started out strongly, albeit with some clumsily worded statements, as the only candidate who manifested a deep awareness of the magnitude of the threat from Islamic law, a comprehensive political system that denies the freedom of speech, the freedom of conscience and the equality of rights of all people before the law.  Islamic law has now been a determining factor in court cases in 23 states, so this is no trivial matter, and Cain seemed determined to resist its advance in the United States.

Determined, that is, until he met with representatives of the Muslim Brotherhood-linked All Dulles Area Muslim Society—the ADAMS Center.  Cain then issued a statement saying he was “humble and contrite for any statements I have made that might have caused offense to Muslim Americans and their friends,” and “truly sorry for any comments that may have betrayed my commitment to the U.S. Constitution and the freedom of religion guaranteed by it.”

Herman Cain will never be President of the United States, and that’s a good thing.  His only distinctive position in this campaign was his opposition to Sharia, and now that he has surrendered to pro-Sharia Islamic supremacists, there is nothing noteworthy about his campaign at all.  He joins Perry, Mitt “Jihadism Is Not Islam” Romney, Ron “They’re Terrorists Because We’re Occupiers” Paul and the rest in their general myopia about the nature of the threat we face, and cluelessness about what to do about it.

If any of these woefully inadequate candidates gets the Republican nomination and defeats Barack Obama, the only certainty for the subsequent four years will be more jihad, aided and abetted by shortsighted U.S. policies.