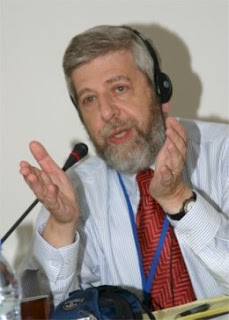 Don Feder is a really bright Republican writer, which is to say, he often subordinates his intelligence to his loyalty to the Stupid Party. Case in point: His May 13 column, NY Times Hides Blame in Mortgage Market Collapse.

In a story today, The New York Times tries to explain the subprime lending crisis and why so many minority mortgages ended up in default. But full disclosure would have implicated the Democrats.

The paper notes that there have been higher default rates for blacks and Hispanics than whites. That’s because, in the boom years of mortgage lending, minorities were more likely to get subprime loans. The Times reports that in 2006, 17.5% of white homeowners got subprime (below the prevailing interest rate) mortgages, compared to 52.8% of blacks and 44.9% of Hispanics.

Because these were loans to borrowers who — in many cases — lacked the ability to repay them, when they defaulted, it had a ripple effect on the housing market and the banking industry.

The Times neglects to tell us the political origins of the crisis. It was the paper’s favorite party that forced these risky practices on lenders.

In 1977, Congressional Democrats decided that low rates of minority homeownership were due to discrimination. With the Community Reinvestment Act, they insisted that lending institutions had an “affirmative obligation” to meet the “credit needs” of the communities in which they were chartered

Regulators begin using minority lending as a criterion for approving mergers, acquisitions and branch openings. All of this exerted enormous pressure for banks to make high-risk loans.

"Regulators begin [sic] using minority lending as a criterion for approving mergers, acquisitions"? That sounds familiar. Where have I heard that before? Oh, yeah, it was from VDARE.coms Steve Sailer, starting last year, in his ongoing series and budding book on the Minority Mortgage Meltdown/Diversity Depression (MMM/DD).

But Steve hasn’t been content only to smack around Democrats; he has repeatedly smacked around the GOP as well, pointing out that it was George W. Bush, beginning in 2002, who aggressively pushed lenders to throw all credit standards to the wind, where uncreditworthy, non-Asian minority borrowers were concerned.

When you tell only one side of the story, you peddle half-truths, and as the old saw goes, ”A half-truth is a whole lie.”

I’d suggest that readers contact Feder, to demand he give Sailer credit, and tell the whole story about the MMM/DD, but while Feder provides readers links, with which to contact the New York Times, he provides them with no way to contact him. He has a regular column, ”Boycott the New York Times,” which has been published since last October by Accuracy in Media. 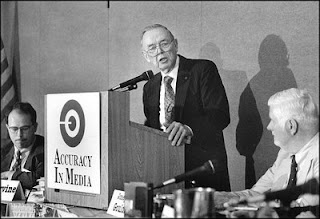 Accuracy in Media was founded in 1969 by one of my journalistic heroes, Reed Irvine, may he rest in peace, who practically invented the field of leftwing media bias criticism. I actually got to meet Irvine in October 2002, at an AIM conference at which I was one of the featured speakers. (I gave a speech on the Steven Hatfill case, on a panel that included Hatfill, the latter’s friend and spokesman, Pat Clawson, and anthrax sleuth Ken Dillon. Irvine’s other organization, Accuracy in Academia, which he founded in 1985, also published two of my articles ten years ago.) Just from that conference, I can tell you that Reed Irvine was an old Marine who was a perfect gentleman, and had perfect comic timing and the rare ability to nail a joke with a long lead-in. I believe that Irvine, who was by trade an economist at the Fed, got his ”journalism training” at the same place I got mine, the good, old American University of Can-Do.

AIM has since been run by his son, Don, who serves as its president, and Cliff Kincaid, who had come aboard a few years earlier, and serves as editor of the The AIM Report. I’ve been familiar with Kincaid’s work since the early aughts, and he has always been a conservative patriot who has uncompromisingly defended America’s sovereignty, and been independent of all parties. Thus, this is an odd turn.

(Like Reed Irvine, Cliff Kincaid is an anti-communist, which their MSM opponents, who have mocked them as ”conspiracy theorists,” consider hilarious. Ask any lefty, and he’ll tell you that there are no communists, only good ”liberals” and ”progressives” maligned by ”deranged” rightwingers.)

A number of months ago, I sought to AIM, but found that them unreachable. They want you to go through their PR rep. Actually, I have some old AIM addresses buried somewhere, but the corporate-style cyber-cocooning burned me, so I didn't bother.

I suspect that having a GOP propagandist may have something to do with donor politics. (AIM gets much of its funding from the Scaife Foundation, though I do not know if Scaife is funding "Boycott the New York Times")

When you have a party hack trying to stir up populist anger against an institution of the other party, while using state-of-the-art technology and PR flacks to wall himself off from his readers, you're treading dangerously on the precipice of astroturfing. What would Reed Irvine say about that, if he were still alive?

I'm not writing this as an antagonist; rather, I revere the memory of Reed Irvine, still find AIM a valuable site, and hope to encourage it to mend the errors of its increasingly corporate ways.