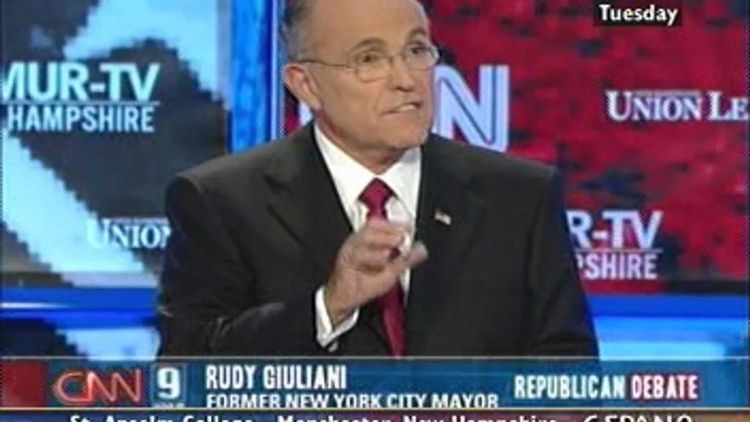 Republican Debate: Giuliani Claims His Sanctuary Policies Were In Response To Federal Failure

I think Giuliani is being disingenuous here—I personally feel he liked sheltering illegal immigrants, for emotional reasons. But he has a couple of points here about the Federal Government's failure to act during the 90's. See below, emphasis added.

MR. WALLACE: Mayor Giuliani, I want to follow up on what Governor Romney said.

In New York City, you allowed illegals to report crimes and to seek medical treatment, you said in the interests of public safety. But in fact, you went a lot further than that as mayor. Back in 1994, you said the following: "If you come here and you work hard and you happen to be in an undocumented status, you’re one of the people who we want in this city. You’re somebody that we want to protect, and we want you to get out from under what is often a life of being a fugitive, which is really unfair."

As president, would you continue to protect illegals from what you then called unfair enforcement of our borders?

So the problem that I had was I had 400,000 illegal immigrants — roughly — in New York City, and I had a city that was the crime capital of America.

I had to do something intelligent with them. I didn’t have the luxury of, you know, political rhetoric. I had the safety and security of the people of New York City on my shoulders.

The federal government deported only 758 people that year from New York City. So the reality is, my programs and policies led to a city that was the safest large city in the country. So they must have been sensible policies.

However, Federal failure or not, Giuliani was on the illegals' side—ask Heather Mac Donald:

Former New York Mayor Rudolph Giuliani sued all the way up to the Supreme Court to defend the city’s sanctuary policy against Congressional override. A 1996 federal law declared that cities could not prohibit their employees from cooperating with the INS. Oh yeah? said Giuliani; just watch me. He sued to declare the 1996 federal ban on sanctuary policies unconstitutional, and though he lost in court, he remained defiant to the end. On September 5, 2001, his hand-picked charter revision committee ruled that New York may still require that its employees keep immigration information confidential to preserve trust between immigrants and government. Six days later, several former visa-overstayers conducted the most devastating attack on the city and the country in history.