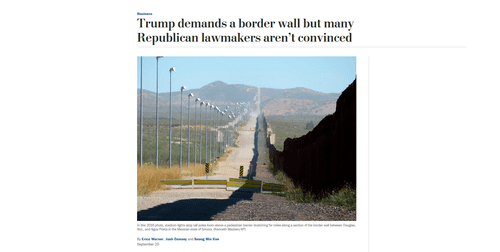 It’s about Republican (not Democrat) recalcitrance in building the wall. The quotes from Congressmen are amazing.

As the WaPo points out “The trouble for Trump is that it’s his own GOP allies—not just his political opponents—who have been standing in the way.”

Yes, except we might question if these Republicans are really Trump’s “allies”.

…the Senate Appropriations Committee chairman, Sen. Richard C. Shelby (Ala.), said he told Trump that funding a 2,000-mile-long wall could jeopardize money for the military and other programs. “Some things are reachable and some things aren’t,” Shelby said he told Trump. “I’m committed to securing the borders, whatever it takes in this country; it’s something we haven’t done. But I’m also committed to funding the government.”

How about using the military to seal the border?

Senator Jeff Flake of Arizona, who is retiring;

Sen. Jeff Flake (R-Ariz.), a Trump critic who is retiring, said the wall hasn’t gotten done because “we have priorities here.”

“As much as he wants to say I campaigned on this, this was the central pillar of the campaign, always attached to it was Mexico will pay for it. And they’re not, of course,” Flake said. “So now for him to come to Congress and say ‘Pony up,’ Congress says no. We never agreed to this.”

Once again, Mexico can pay for the wall through a tax on remittances—which is Congress's responsibility. That could be done.

But the most outrageous congressional quotation in the article is from a congressman in my home state of Oklahoma, a red state with a very disappointing congressional delegation:

“We haven’t given up the fight. But if it keeps us from doing other things that are pretty important, like defending the country, then I think it’s a fight not worth having right now,” said Rep. Tom Cole (R-Okla.), a senior member of the House Appropriations Committee. “Let’s get these critical day-to-day functions of the government done, and the American people will be expressing an opinion in the election. We’ll see where we’re at when we come back.”

Oh, so Congressman Cole thinks that a wall on the border would not defend the country?

It’s rather amazing that a congressman could say that, but then again, not surprising. A lot of these guys are more concerned about Middle Eastern borders than our own.

That’s like saying having a front door isn’t important.