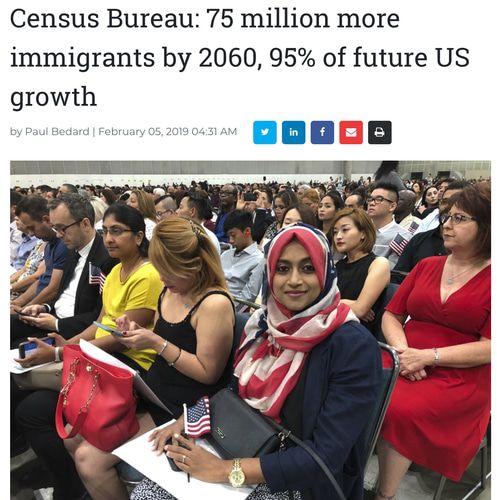 Replacement Migration: Almost All Population Growth In United States Will Result From Immigrants

The Census Bureau is projecting that the population of the United States will hit 404 million by 2060, and nearly all of the net growth will be from immigrants and their families.

A new analysis of the figures shows that of the 79 million more in 2060, 75 million will be legal and illegal immigrants and their families, a population the size of France and Belgium combined.

Without immigration, according to the Census analysis from the Center for Immigration Studies, the U.S. population would increase by just 3.7 million, the latest sign that the country is on a path to zero native population growth.

As Peter Brimelow has pointed out, this is a dramatic departure from the American norm.

For most of its history, the U.S. basically grew through natural increase. Its population would have been about half of what is now—that is, it would have been bigger than Japan and Germany—if there had been no immigration at all after the American Revolution.  The nation that de Tocqueville described in Democracy in America the 1840s was the same as it had been in 1790: overwhelmingly Protestant and British.

This is a classic example of what the United Nations has approvingly called "replacement migration." If it was being done to any non-Western country, it would be called genocide.

President Trump has done nothing to change the overall trajectory, which not only threatens the extinction of his electoral coalition, but of the historic American nation generally. It's hard to imagine a more sweeping, total change than what is occurring in the United States. The American people never voted for such a change and the election of President Trump shows that have actually resisted it. However, it has made no difference.

If the American people have no input on this most existential of issues, in what possible sense can we refer to the United States as a democracy?