Reparations for the West Indies? 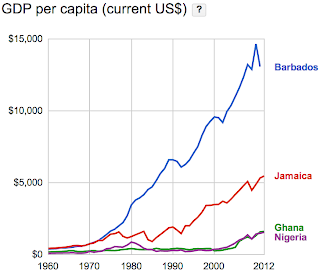 Have you noticed that the more we get into the Age of Obama, the more we are lectured to focus on the Age of Slavery? Here, for example, is an op-ed in the NYT:

Confronting the Legacies of Slavery

Late one afternoon in March, officials unveiled a new monument at the University of the West Indies, in Cave Hill, Barbados. The ceremony featured African drumming, a historian’s lecture, a bishop’s prayer and a song performed by a school choir with the chorus, “We cry for the ancestors!”

Those ancestors, 295 of whom have their names on the monument, were slaves who once lived where the campus now stands. What today is a university was once a plantation. What is now a nation was once a colony. In Barbados and throughout the Caribbean, slavery remains a vivid and potent metaphor, and a cultivated memory.

Presiding over the event was Sir Hilary Beckles, the head of the university and a prolific historian. He and his Jamaican colleague Verene Shepherd have spurred on the recent call by the 15-member Caribbean Community for Britain, France and the Netherlands to pay an undefined amount of reparations for slavery and the slave trade. The group plans to file suit in national courts; if that fails, it will go to the International Court of Justice.

Uniting the Caribbean around any kind of policy is not easy. The region is linguistically and politically fragmented, with links to former colonial powers or the United States often trumping cooperation. But with this new call, the community, known as Caricom, is tapping into one thing that all its member states have in common: the lingering effects of slavery.

One irony of history is that, with the exception of Haiti, average per capita incomes of the descendants of slaves in Caribbean countries are well above those in West African countries. Even more ironically, many of today's impoverished West Africans are descended from the people who sold the West Indians' ancestors into slavery.

The graph from Google above features two West Indian countries and the two most affluent West African countries (leaving aside two super-corrupt oil countries: Gabon and the nightmarish Equatorial Guinea). Nigeria has oil and corruption, while Ghana only began exporting oil three years ago. I haven't been following the news lately, but Ghana, after a bad start in the 1960s-70s, has usually been said to be the best governed West African country. It looks like its economy was turning up even before the oil started flowing.

While not the richest West Indian country (Trinidad, for example, has oil, but also, more impressively, refining; and some very small islands are wealthy tax refuges), Barbados has long been seen as the nicest West Indian country. Jamaica, not so much. So, the Jamaica to Ghana comparison seems not unreasonable.