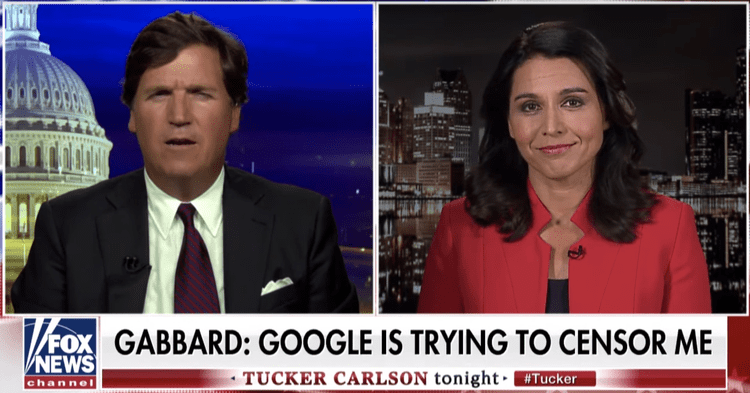 It’s encouraging to see a member of Congress take on Big Tech for its growing control over Americans’ freedom of speech and thought. 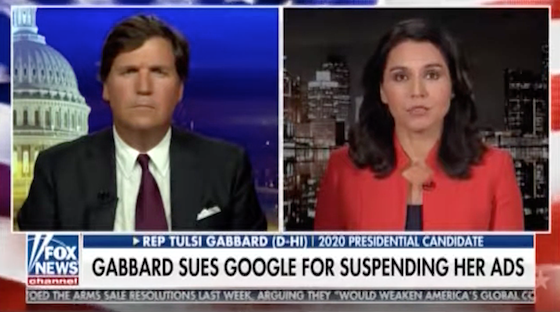 TULSI2020: In the hours following the 1st debate, while millions of Americans searched for info about Tulsi, Google suspended her search ad account w/o explanation. It is vital to our democracy that big tech companies can’t affect the outcome of elections https://t.co/n7Y7y2dQZ9

Usually, Silicon Valley aims its animus at conservatives, but perhaps Big Tech sees Gabbard as too free-thinking for a Democrat.

TUCKER CARLSON: We’ve done a lot of work on this program to expose the bias and corruption at Google which is the world’s most powerful company by far, but Google and its employees don’t just have it out for conservatives — we want to make that clear. Google is hostile to anyone who challenges the status quo since Google is the chief beneficiary of the status quo.

Congresswoman and presidential candidate Tulsi Gabbard learned that the hard way just after the first presidential debate where Gabbard was the single most searched Democratic candidate, Google blocked her from being able to buy new ads.

Now she’s become the first presidential candidate to sue Google: she’s accused them of censoring her message. We are happy to have Congresswoman Tulsi Gabbard join us tonight.

Congresswoman, thanks very much for coming on. Tell us the point of this suit.

REP. TULSI GABBARD: Here’s the bottom line: this is really about the unchecked power that these big tech monopolies have over our public discourse, and how this is a real threat to our freedom of speech and to our fair elections.

So this really isn’t about me; it’s about taking action on behalf of the American people because we’ve got to understand here that if Google can do this to me as a sitting member of Congress running for the highest office in the land, that means they can do this to any candidate running for any office anywhere in this country and frankly to any person in this country.

And that’s why it’s so important that whether you’re a progressive or conservative, whether you consider yourself on the left or the right, we all have to stand united to protect our freedom of speech. Because look, today it’s me, tomorrow it could be you or someone else.

CARLSON: Yes that’s exactly right. God bless you by the way. Why are you the only candidate who’s saying this?

GABBARD: I can’t explain that, Tucker, but I do know how important it is that we protect our freedoms in this country. It’s something I think that people take for granted unless they’re the ones under attack.

CARLSON: So you filed this lawsuit, and God bless you for doing that. What should lawmakers in the Congress do to rein in this tech this dangerous tech monopoly called Google?

GABBARD: Washington needs to act, there’s no question about it because we’re talking about Google, Facebook, Twitter — these are big tech monopolies that have this unchecked power to influence our public discourse, to influence what kind of information people are seeing. Google is in control of 88 percent of all internet searches in the United States and I believe it’s 92 percent of all internet searches in the world.

Google has spoken openly about how they have shut out those who have not broken any of their Terms of Use, so this is really what’s at stake here and it’s important that Congress takes action to provide this oversight and accountability and ultimately to break up these big tech monopolies.

CARLSON: So in the thirty seconds we have remaining, are you going to bring this up in the debates this week?

GABBARD: I look forward to doing so this is such an important issue that is integral to every single one of our freedoms that we cherish and that we all must stand up and protect.

CARLSON: It’s so important — I spoke to a right-winger today who I think disagrees with you on virtually everything and on the basis of this alone sent you money today because it is that important.

GABBARD: This is America and this is what we’re talking about here — this freedom. Thank you so much, Tucker.

Post
After 4 Months of Nonstop Blackness, Will Feminists Demand to Own the Autumn?
MORE...
POPULAR TAGS