It’s good to see dependable friend of sovereignty Rep Steve King moving forward with his lawsuit against Obama’s administrative amnesty for millions. In the this Fox News video  CIS’ Steve Camarota makes the point that core issue is Constitutional — that the President usurped the job of Congress by ignoring its refusal to approve the DREAM Act amnesty. 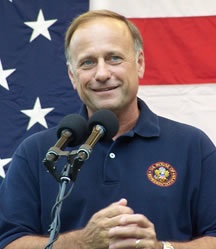 The House Republicans have been disappointing in various ways, but particularly regarding immigration enforcement and also Obama’s increasing encroachment into powers of the legislative branch. Certainly the do-nothing no-budget Democrat Senate is a daunting roadblock, but more can be done, and Congressman King is showing one way forward.

Iowa Republican Rep. Steve King says he expects that the immigration lawsuit he is spearheading against President Obama will be filed in a court within weeks.

“I think we’re talking weeks rather than months,” King told The Daily Caller in an interview Friday about the planned legal action against Obama.

King’s lawsuit is in response to the Obama administration’s divisive announcement last month that the government would stop deporting certain illegal immigrants who arrived in the United States as children.

The congressman said a meeting was held last Tuesday with potential co-plaintiffs interested in signing on to the lawsuit to prevent the Obama administration from going through with its plan.

King, who would likely be the lead plaintiff, would not specifically name who else attended, but he said one U.S. senator, four state executive offices and five non-governmental organizations were represented at the meeting.

“It was a very impressive group of people from my perspective,” he said.

The congressman said the challenge is to meet the requirement for standing, but said the consensus of those at the meeting was that, “If the case is heard on the merits, we’re in an excellent position to succeed.”

He said there are at least four possible legal components to the lawsuit, including seeking a writ of mandamus, which would direct Obama to enforce the law.

“There is an effort that might simply invalidate his executive edict,” King explained, “and there’s also a federal statute that requires them – law enforcement officers – to place illegals into deportation proceedings.”

“Another component of it,” King said, “is the violation of the administrative procedures that the president appears to have ordered [US Citizen and Immigration Services] to engage in.”

Obama’s executive order is expected to affect between 800,000 and 1.4 million people in the country illegally.

The congressman said they are working on how to fund the effort, as well as a strong media message.

“I don’t think there’s anyone who hasn’t wondered at least what kind of media message might have changed the decision of the Supreme Court,” King said. “So we have to carry a media message as well as a strong legal team as well as fundraising.”