Rep. John Yarmuth D-Ky: Amnesty Will Pass Because "All The Money [I. E. Zuckerberg] Is On The Side Of Pushing It" 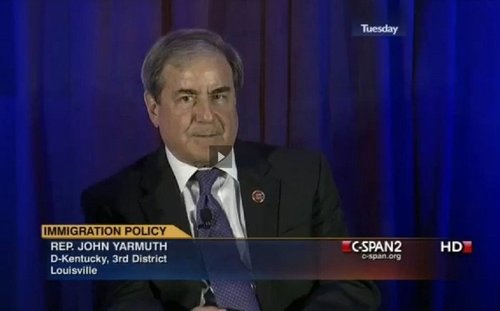 One of the commenters on ImmigrationReform.com asks for a "cite" for the source of Yarmuth's quote—the answer is that Ms. Williamson is transcribing it herself, as Steve Sailer said, from a C-Span Video which you can see here:Congressional Hispanic Caucus, Immigration Policy, C-SPAN, Oct 1, 2013

Naturally the organizations and industries that stand to profit the most have expressed support for the Senate amnesty bill. The AFL-CIO and other struggling unions are eyeing potential dues paying members. The agricultural industry wants a guest worker program that makes it even easier to attract foreign workers for substandard pay. And the Chamber of Commerce and tech industry are clamoring to hire skilled and non-skilled workers from overseas to do jobs unemployed and underemployed Americans would do for a just compensation.

More disturbing is Rep. Yarmuth’s second reason for being optimistic about amnesty:

“And probably the most significant factor is there is no money on the other side of this issue. There’s nobody out there ready to spend $100 million to defeat comprehensive immigration reform.

In fact, all the money is on the side of pushing it. And just a couple weeks ago we met with Mark Zuckerberg from Facebook and he’s raised, well, a lot of his own money, but he’s raised $50 million to run ads supporting people who will support comprehensive immigration reform and to pressure people who may be on the fence.”

So, politics-as-usual prevails in Washington, but here we have a Member of Congress actually admitting that money talks. Forget about representing constituents, Americans, even legal residents – Zuckerberg has $50 million to run ads against you if you don’t support amnesty for illegal aliens and a massive influx of legal workers that will make his industry even more profitable.

“And I think the most compelling thing that he said when we met with him was – and he raised this from his buddies in the high-tech industry – but he said they didn’t give money to this cause because of economic reasons. They gave it because of humanitarian reasons. And that’s really significant.”

Keep telling yourself that, Zuckerberg. You and the young Silicon Valley set who have donated to Zuckerberg’s FWD.us claim to be compassionate millenials, but clearly you should get off your high horses. Admit that you’re no better than the big business leaders who came before you – using money and threats to put big business interests before Americans.