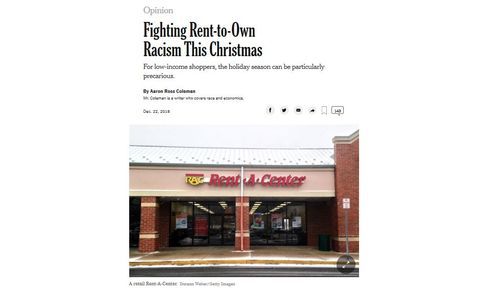 "Rent-to-Own Racism": Is Black Anti-Whiteism Acceptable In This Situation?

Fighting Rent-to-Own Racism This Christmas
For low-income shoppers, the holiday season can be particularly precarious.

By Aaron Ross Coleman
Mr. Coleman is a writer who covers race and economics.

… My junior year, I read Manning Marable’s “How Capitalism Underdeveloped Black America.” In it, the author outlined the various debt schemes retailers use to target black neighborhoods. “White businessmen now recognize that the urban poor and lower-income consumers can be made to pay much higher prices than affluent white suburbanites for commodities, so long as adequate lines of credit are made available to them.”

Although he wrote the book in 1983, it explained the ideology of the predatory world that surrounded me more than 30 years later. This was the used-car dealer who tried to get me to finance a 10-year-old Honda Civic for $18,000. This was the subprime lending that wiped out half of black Americans’ wealth in the Great Recession. These were the majority-black neighborhoods full of Rent-A-Centers and payday lenders.

The author goes on to give blacks some good advice on how not to be outsmarted by The Man into paying a lot more than they have to for stuff they shouldn’t be buying in the first place.

I’m torn over this anti-white tactic. Being white, I dislike anti-white resentment. On the other hand, I can see the point behind the Black Muslim-style use of anti-white hate to persuade blacks to be more bourgeois: Rent-to-Own is just the white devils’ tricknology!

On the other hand, Jews never allow blacks a platform in the NYT to denounce Jews rather than whites for having been disproportionately involved in the past in businesses in black slums that outsmarted black consumers.