The usual suspects performed the standard whine on behalf of lawbreaking foreigners in Los Angeles on Friday. Archbishop Jose Gomez led an interfaith gaggle of liberal religious robe-a-dopes in a vigil for the long-suffering foreigners who have come to steal American jobs and grab other freebies.

Such is the decline of morality under liberal influence: now it’s religious redistribution, specifically rob Peter to pay Pablo.

One interesting point in La Times’ article was the photo of a Mexican girl in a wheelchair whose parents brought her to this country for free-to-them medical care for her spina bifida. Treatment costs for the defect range from $532,000 to over a $1 million. 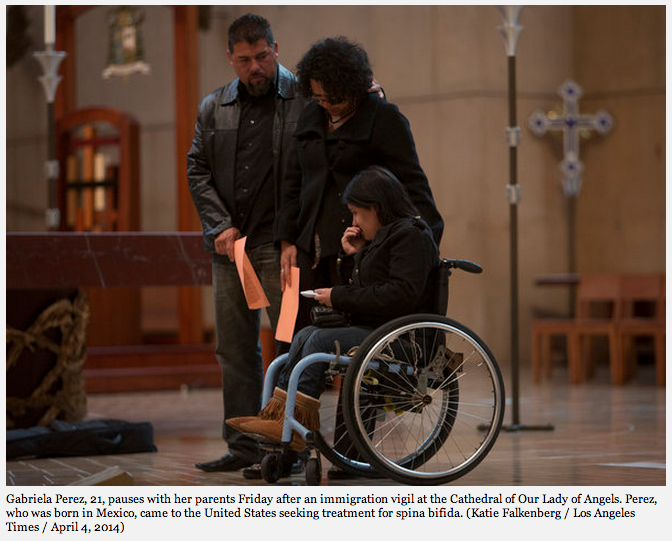 The paper must regard lawbreaking foreigners ripping off American taxpayers for healthcare as acceptable, though it is becoming normal.

Another area of illegal alien demands is organ transplants, even though 18 people die daily from the shortage of organs. Another Mexican medical moocher, Ana Puente, got three, maybe four liver transplants paid by California taxpayers after she was brought illegally to the US for healthcare. Alien Jesus Navarro got a kidney after mounting a media campaign for public support in San Francisco.

Meanwhile, US citizens travel to Mexico for affordable healthcare, so it’s not like there are no doctors there. Mexico is wealthy, #14 in world GDP, and could easily take better care of its own people like the kid with spina bifida rather than shoving them north to Uncle Sucker.

In spite of facts, the religious amnesty hacks blather bromides and beg for the deliverance of thieves. Archbishop Gomez (born Mexican) said the undocs “need justice” aka amnesty, but genuine justice would mean legal protections for America’s forgotten workers who bear the brunt of illegals ruining the job market.

Undocumented immigrants “need mercy and they need justice,” said Archbishop Jose Gomez, welcoming an array of Christian, Jewish and Muslim leaders to the vigil, held at the Cathedral of Our Lady of the Angels.

Gomez, who has made changing immigration laws a hallmark of his three-year tenure leading the L.A. archdiocese, described current laws as “totally broken” and said they were unfairly punishing families and children.

“These are human souls, not statistics. These are children of God, we cannot be indifferent to their suffering,” he said.

While the audience was sparse — with only a few dozen people in attnendance to hear prayers for compassion along with repeated calls for President Obama to act — the religious leaders on hand, from each of the three main Abrahamic traditions, represented a burgeoning interfaith push in the L.A. area for immigration reform.

Several leaders said that five or 10 years ago such an event would probably have been almost entirely Catholic or Christian, with a focus primarily on the Latino community.

“Times have changed,” said Shakeel Syed, executive director of the Islamic Shura Council of Southern California. “Some have framed the issue as a monolithic issue of a particular denomination, but that is a myth. The immigration issue transcends all creeds, all colors, all languages.

Diamond connected the immigration problem to this month’s Passover, which commemorates the story of the Exodus and the liberation of the Jewish people from slavery in Egypt.

“Our ancestors knew the pain, the anguish of being unwelcome strangers in a strange land,” Diamond said. “We must never do that to others.”