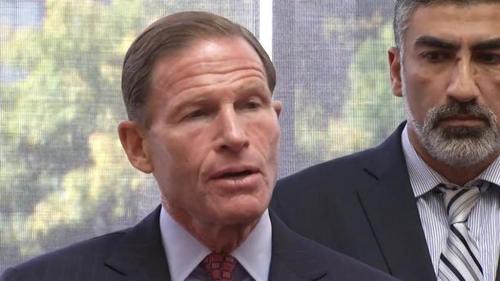 Refugee Resettlement Watch Roundup For the week ending October 10, 2015: "Who was that man over Senator Blumenthal’s left shoulder?"

Ann Corcoran's Refugee Resettlement Watch is up for the week ending October 10, 2015. Here are the top three posts:

3)Update: Who was that man over Senator Blumenthal’s left shoulder?

Since I had to click to find out the answer, I'll tell you who the man over the shoulder of Senator Richard Blumenthal (D-CT)  was.

Blumenthal, who wants to "to eliminate some screening" for Syrians brought a man from CAIR, the Council on American-Islamic Relations to a  press conference about his plan to make America that much less safe. Ann says

"That is CAIR-Connecticut’s Executive Director behind Senator Blumenthal. Getting pretty brazen aren’t they, or is Blumenthal just pretty dense to invite CAIR to be so prominently involved in lessening security screening for refugees?"