The National Football League's Washington Redskins team is under attack over the mascot name "Redskins".

Early this week, fifty U.S. senators wrote a letter to the NFL commissioner asking him to force the Redskins´ owner  Daniel Snyder  to change their name.    Think about it, these  guys can't balance the federal budget  and they're spending time trying to coerce a football team into changing its name!

The encouraging news is that  the Redskins  haven't buckled under yet.   Redskins President Bruce Allen (son of Coach George Allen and brother of a politician with the same name)  wrote a letter to the  Senate Majority Leader, addressing him as "the Honorable [sic]  Senator Harry Reid".  You can read the entire text of the letter here.

Bruce Allen is an example to us all of how to resist the PC onslaught and fight back.   (For more information, see this article here. ) 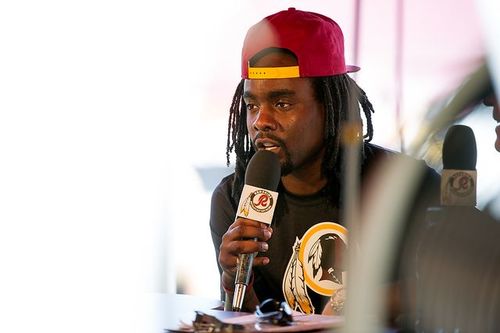 Another defender of the Redskins is D.C.-born Redskins fan, the  Nigerian-American rapper  Olubowale Victor Akintimehin  (known as Wale, or Wale Folarin) who has been tweeting criticism of Reid.(Here's a photo of Wale wearing some Redskins regalia).

Here are some of Wale's tweets:

- I don't respect it . He pointin fingers but he super sketchy

You're right on Wale, about people using  racism "to make a name for themselves".