In California K-12, one in four students are classified as Limited English Proficiency, indicating some are likely the children of illegal aliens along with legal immigrants. And the aliens keep coming, contrary to MSM reports.

So it is useful to recalculate occasionally the costs of the continuing, decades-long tsunami of illegal aliens mooching off the state’s depleted financial resources. The numbers are brutal for battered taxpayers.

No one can deny that increasing numbers of children of illegal immigrants attend public schools in the United States and that U.S. taxpayers pay the costs. Those sympathetic to illegal immigration tend to remain silent about these costs, while illegal-immigration opponents often fall short on specifics. In the interest of more informed discourse, here are the numbers.

According to a study released last year by the Pew Hispanic Center, as of 2008, 11.9 million illegal immigrants lived in the United States, more than triple the 3.5 million who lived in the country in 1990.

Among the states, California has the largest number of illegal immigrants with 2.7 million, nearly double the 1.4 million in Texas. California’s illegal-immigrant population has swelled by 1.2 million since 1990, while Texas has added a million. A large proportion of illegal-immigrant households are families.

The Pew study found that in 2008, ”Children of unauthorized immigrants are 6.8 percent of students enrolled in kindergarten through grade 12,” an increase from the 5.4 percent in 2003. The proportion was double in California, where 13.5 percent of k-12 students in 2008 were the children of illegal immigrants.

Given these percentages, cost estimates of educating these children are staggering.

The U.S. Census Bureau just released 2008 figures showing the national average total per-pupil funding from all revenue sources was $12,028. Although estimates of the number of school-age children of illegal immigrants don’t separate those attending public vs. private schools, it’s reasonable to assume that nearly all attend public schools since most come from lower-income families. Therefore, if one multiplies $12,028 by the roughly 3.7 million students with illegal-immigrant parents, then one gets a national total funding cost of $44.5 billion.

In California, total funding per pupil from all state, federal and local revenue sources was $11,649. With roughly 923,000 students in the state with illegal-immigrant parents, these students represented a total cost of nearly $10.8 billion out of a total 2008 k-12 education budget of $72 billion. An important caveat is that these totals rely on average per-pupil funding numbers.

Although almost three-quarters of the children of illegal immigrants were born in the United States and are therefore citizens, had their parents not entered the U.S. illegally these children likely wouldn’t be in U.S. public schools and wouldn’t require taxpayer funding. Thus, it’s fair to say that their education cost stems from their parents’ illegal entry into this country.

The public-education establishment can’t have it both ways on this issue. The Los Angeles school board, for instance, harshly criticizes Arizona’s immigration enforcement law, but also complains about its own budget shortfalls. The numbers, however, confirm that illegal immigration imposes large costs on the public school system. Policymakers should acknowledge and wrestle with this expensive reality instead of satisfying themselves with cheap rhetoric.

Getting a first class K-12 education for free is not enough for entitlement-engorged illegal alien students. Many demand government-subsidized college via the DREAM Act, a Christmas tree of goodies, including amnesty for ”students” of up to 35 years old.

As shown in the photo below, DREAM Act protestors closed down LA’s Wilshire Boulevard for hours last May to make their demands. 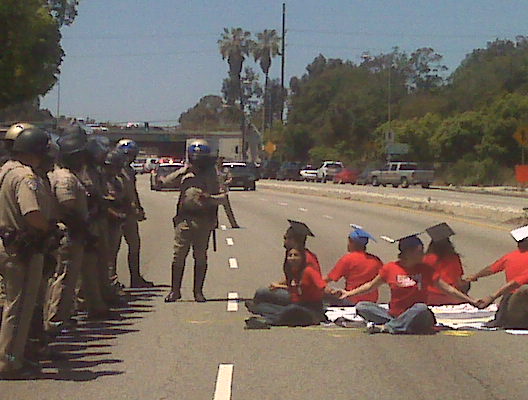