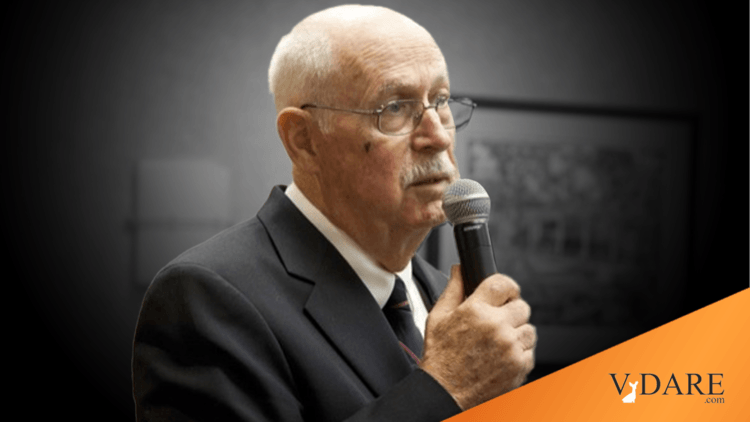 Prof. Wolters was an honest historian; he wanted to know what really happened. He was therefore an endangered species in a profession now preoccupied with unmasking the alleged horrors of “race, class, and gender.” His books were jarring to modern sensibilities, but were so carefully researched and argued that ideologues could not dismiss them. Some even won prizes.

I first became aware of Prof. Wolters when his 1984 The Burden of Brown was released in paperback in 1992. I was struck by the title: What could have been the burden of the famous Supreme Court case of Brown v Board of Education that struck down school segregation? In my review, I summarized that burden: “Nine unelected justices have repeatedly endorsed ruinous policies that flouted the Constitution, the Congress, and the will of the American people . . . [and imposed] the mandatory racial mixing that destroyed the American public school system.”

Needless to say, my words were much more inflammatory than anything in the book, but they were justified by the events Prof. Wolters described. This was part of his genius: present the facts even-handedly and let others draw conclusions. This is how The Burden of Brown had the unique distinction of both an admiring review in American Renaissance and the American Bar Association’s prestigious Silver Gavel Award.

Prof. Wolters and I started corresponding, and he sent me more of his books to review: Right Turn, Race and Education, and The Long Crusade, every one an impressive study of American race relations. But I balked when he sent me Du Bois and His Rivals. Did I really want to read a biography of the man who pioneered the it’s-all-whitey’s-fault school of blackness? Out of respect for Prof. Wolters, I decided to drag myself through what would surely be 300 tedious pages. How wrong I was. I was captivated by Prof. Wolters’ dispassionate portrait of a fascinating man.

As our friendship deepened, I began to wonder whether I would dare invite Prof. Wolters to speak at an American Renaissance conference. An award-winning historian with an endowed chair at a major university has a lot to lose by public association with the likes of me. I was happy but a little worried when he agreed. His 2004 talk, “Fifty Years Since Brown v Board of Education,” was widely applauded, as was “Closing the Gaps: Education Reform Since the 1950s” at a nearly scuttled conference four years later. Campus lefties yelled mightily about Prof. Wolters’ appearances, but he was doubly protected: by tenure and by his unimpeachable and dignified character. Prof. Wolters went on to write several excellent articles for AmRen that showcased his unique combination of broad learning and careful judgement.

In person, Prof. Wolters was as charming and incisive as his writing. At any gathering, he was always in a circle of admirers. Newcomers were surprised to find a man of his distinction to be so gentle and approachable. It was on these occasions that I had the pleasure of getting to know Mrs. Mary Wolters, his wife of 38 years, who survives him. Their affection and mutual appreciation added a special warmth to any occasion.

Prof. Wolters joins two other AmRen-conference alumni taken from us too early: Philippe Rushton and Sam Francis. Each, in his field, was quietly courageous in the pursuit of truth and the fight against cant. All of us who knew and respected Prof. Wolters are grieved by this loss.