In a story made for the internet, a recent survey following an upwelling of liberal hopes for a President Oprah indeed showed her defeating Trump in 2020 by 10 points.

President Trump said that he liked Oprah Winfrey and didn’t believe she would run for president in 2020, when he spoke with reporters on Tuesday. Though he did express confidence if Winfrey did run, saying: “Yeah I’ll beat Oprah. Oprah would be a lot of fun.”

On the heels of that presidential optimism, comes a Rasmussen poll which suggests that the president’s air of confidence might be misplaced.

According to a Rasmussen Reports survey released on Wednesday, 48 percent of likely U.S. voters would choose entertainment mogul Oprah Winfrey in 2020, while 38 percent would choose Trump. . . .

Perhaps when voters see Oprah’s “Die Whitey” video from the BBC in 2013, those positive thoughts will fade away. It’s a political ad producer’s dream, footage that stands alone as a statement of racism:

Plus, there are other imperfections in The Great Oprah. I reported in 2013 that she attacked a Swiss sales clerk for being rude to her because of alleged racism, which was convenient timing because Winfrey had a new movie opening and likely wanted publicity: Oprah Declares Swiss to Be Racists; Time Magazine Obediently Piles On.

The Daily Wire compiled a nice list a couple days back, TOP 5 OPRAH FAILS: Calling For People To Die, Racism Hoaxes, Allowed Praise Of Jihad On Show — And More that includes her friendships with Hollywood monsters like accused mass rapist Harvey Weinstein (shown below). So Oprah may not be the idealized diversity goddess of liberal dreams. Oh, well! 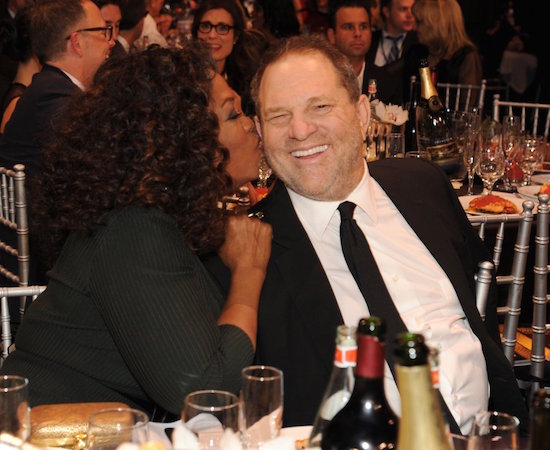