The Rasmussen quiz-masters tend to ask more interesting questions than some polling organizations, and today’s item is enormously fascinating: a great majority of voters believe the country’s rulers don’t give a rat’s ass about the opinions of the electorate.

And – no surprise – one of the most indicative issues in this regard is immigration.

The frustration that voters are expressing in 2010 goes much deeper than specific policies. At a more fundamental level, voters just don’t believe politicians are interested in the opinions of ordinary Americans.

A new Rasmussen Reports national telephone survey finds that 68% believe the nation’s Political Class doesn’t ”care what most Americans think.” Only 15% believe the Political Class is interested in the views of those they are supposed to serve. Another 17% are not sure.

Skepticism about the Political Class interest in voters is found across just about all demographic and partisan groups. However, self-identified liberals are evenly divided on the question. Â Eighty-eight percent (88%) of conservatives and 64% of moderates reject the notion that the Political Class cares. […]

Over the past couple of years, most Americans have opposed, in many cases strongly, initiatives by the Political Class including the bailouts of the auto and financial industries. Most voters still favor repeal of the national health care plan and by a two-to-one margin disagree with the Justice Department’s decision to challenge Arizona’s new immigration law in court. Sixty-four percentÂ (64%) believe the federal government by failing to enforce immigration law is more to blame for the controversy over Arizona’s law than state officials are for passing it.

In fact, 55% don’t even think most members of Congress pay all the taxes they owe.

working together against the rest of us.

Below, the joy of treason – From left, Senators Mel Martinez (R-FL), Lindsey O. Graham (R-SC), and Edward M. Kennedy (D-MA) enjoyed a bipartisan yuck in 2007, probably about destroying America with their illegal alien amnesty bill – which failed due to the outrage of the citizens. 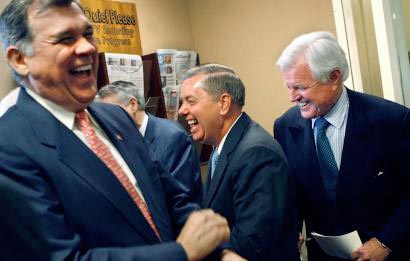