It's disappointing that only 58 percent of Americans believe that ballots should be English-only, a decrease of 10 points from five years ago.

Language diversity in elections does not come cheap because of translation and printing costs. For example, Los Angeles County spent $3.3 million to produce ballots in seven languages and hire diverse poll workers in the 2002 primary.

Plus there's the tiny detail that becoming a naturalized citizen requires the ability to speak and understand English. So no legal voter should need a Spanish or Mandarin or Tagalog ballot, by definition. 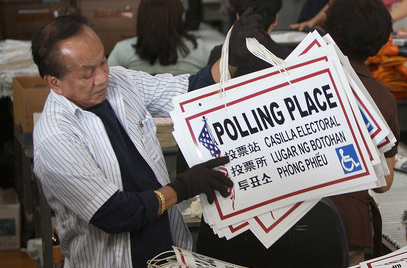 When voters goes to the polls, most still want to see their ballots in English only.

Seventy-eight percent (78%) of Republicans and 60% of voters not affiliated with either major party support ballots only in English. Fifty-nine percent (59%) of Democrats prefer bilingual ballots.

Americans overwhelmingly believe that English should be the official language of the United States and reject by sizable margins the idea that such a move is racist or a violation of free speech.Â Seventy-three percent (73%) of voters also continue to feel that when people move to America from other countries, they should adopt this nation's culture. [. . .]

The new numbers are identical to findings fromÂ last August but mark a 10-point drop in support for English-only ballots fromÂ June 2006.

A majority of white voters (64%) favor English-only ballots, while a majority of black voters (71%) want ballots printed in both English and Spanish. Voters of other ethnicities are evenly divided.

Fifty-seven percent (57%) of the Political Class think ballots should be bilingual, but 67% of Mainstream voters feel they should be in English only.

Seventy-five percent (74%) of all voters believe voters should be required to show photo identification before being allowed to cast their ballot. By a 48% to 29% margin, voters think ineligible people voting is a more common problem than legitimate voters being denied their right to vote.

In 2008, then-presidential nominee Barack Obama said that "instead of worrying about whether immigrants can learn English," Americans "need to make sure your child can speak Spanish." But voters strongly disagreed and also did not feel it was important for Americans to be bilingual or trilingual. Most also felt that government documents should be printed in English only.