Only 20 percent of voters approve of the mosque proposed to be built near Ground Zero, compared with 54 percent against. This poll result is due at least partially to the hard work from Pamela Geller, Robert Spencer and the other people at Stop islamization of America, who organized the excellent June 6 demonstration against the mosque that drew thousands (see Rally against Ground Zero Mosque a Great Success). They have also been active in presenting the issue to the media.

The rejection of the mosque by the American people additionally reflects the growing awareness that Islam is the enemy of our most basic values, despite the avalanche of liberal propaganda about the Religion of Peace.

Just 20% of U.S. voters favor the building of an Islamic mosque near the Ground Zero site of the World Trade Center in New York City, according to a new Rasmussen Reports national telephone survey.

Fifty-four percent (54%) oppose the planned building of a mosque near where Muslim terrorists brought down the skyscrapers by crashing commercial airliners into them on September 11, 2001. Three thousand people died in the incident and related attacks that day.

Americans don’t seem to be strongly engaged with the story, however. Just 22% say they’re following the story Very Closely. Another 29% are following it Somewhat Closely.

The developers of the 13-story Cordoba mosque two blocks from Ground Zero say the project is ”about promoting integration, tolerance of difference and community cohesion through arts and culture.” Opponents of the project, including many who lost loved ones in the 9/11 terrorist attacks, see the mosque as a deliberate provocation that dishonors the memories of those who died.

Some have argued that the mosque will ”honor” the 9/11 victims by promoting the peaceful side of Islam, but only 30% are even somewhat confident that the proposed mosque is being built to honor those who died in the 9/11 attacks. Fifty-eight percent (58%) don’t share that confidence. This includes 15% who are Very Confident and 32% who are Not At All Confident. […]

Thirty-eight percent (38%) of voters now feel America is safer today than it was before 9/11, up seven points from an all-time low of 31% in late May. Forty-five percent (45%) do not believe this to be true.

Last September, 49% of Americans said most of their fellow countrymen have already forgotten the impact of the September 11, 2001 terrorist attacks. Thirty-nine percent (39%) disagreed.

Voters 40 and older are much more likely to oppose the Ground Zero mosque than those who are younger.

Seventy-six percent (76%) of Republicans and 50% of voters not affiliated with either major party oppose building the mosque near the World Trace Center site. Democrats are evenly divided on the question.

Democrats are also much more confident that the mosque will honor those who died on 9/11.

Only 13% of voters think America’s relationship with the Muslim world will be better a year from now. Thirty percent (30%) say that relationship will get worse, and 48% think it will stay the same.

Below, the D-Day rally in Manhattan against the Ground Zero mosque drew a huge crowd. 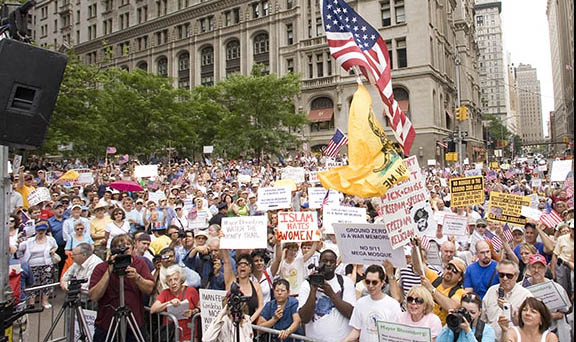 Furthermore, the Cordoba Initiative is not an outreach program but a thinly disguised example of Muslims proclaiming Islamic supremacy in America.