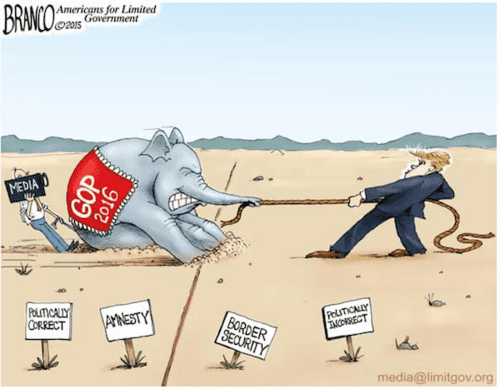 Rasmussen Poll: 71 Percent of Americans Think PC Is a Problem

Donald Trump’s un-consultantized speech about political matters has had many positive results, most particularly honesty about immigration and borders. Also high on the list of accomplishments is his effective mauling of political correctness.

One measure: a late-August poll from Rasmussen found 71 percent of Americans believe political correctness is a problem. By comparison, a similar question posed 14 months ago in June 2014 resulted in 61 percent saying that the nation has become too politically correct.

Trump’s bluntness has been a welcome change from the leftist barrage of things we are not supposed to say because we might hurt the illegal aliens’ feelings. Limitation of speech is one step away from thought control. As George Orwell wrote in the book 1984, “In a time of deceit telling the truth is a revolutionary act.”

From the August 6 Presidential debate:

TRUMP: I think the big problem this country has is being politically correct.

I’ve been challenged by so many people, and I don’t frankly have time for total political correctness. And to be honest with you, this country doesn’t have time either. This country is in big trouble. We don’t win anymore. We lose to China. We lose to Mexico both in trade and at the border. We lose to everybody.