What’s interesting here is how a state a highly impacted by illegal immigration has a significantly higher level of disapproval for the misunderstanding of the 14th Amendment than the nation at large (see Rasmussen Poll: 58% Reject Anchor Baby Citizenship). 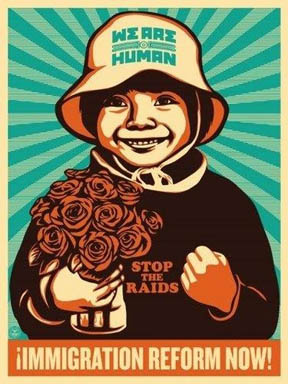 La Raza frequently uses images of appealing children to promote the lie that Americans demanding immigration enforcement are cruel to kiddies: ”Deporting dad would be MEAN” is a common theme.

The image shown is a Mexican poster child for invasion, literally, that combines a smiling kid holding flowers who also has a tiny fist that promises a future of Marxican activism. Symbolic, or what?

Along with squawking against deportation, Raza types portray birth citizenship as an emotional issue, rather than one of Constitutional interpretation. This poll shows that the Mexo-strategy of trying to guilt-trip Americans using tearful kiddies is largely a failure.

Arizona legislators are already being criticized for another tough measure they are considering to combat illegal immigration — denying birth certificates to children born to illegal immigrants in the state.

A new Rasmussen Reports telephone survey of Likely Voters in Arizona finds that 64% agree that children born to illegal immigrants should not automatically become citizens of the United States. Twenty-six percent (26%) disagree and say these children should become U.S. citizens.

Nationally, 58% of voters say a child born to an illegal immigrant in this country should not automatically become a citizen of the United States. Thirty-three percent (33%) disagree and say if a women enters the United States illegally and gives birth to a child here, that child should automatically be a U.S. citizen. That’s what the current law allows, and many believe it would require a constitutional amendment to change the law.

In Arizona, there’s virtually no difference of opinion between men and women on this question. Seventy-one percent (71%) of Arizona voters who do not have children living with them oppose automatic citizenship for those born to illegal immigrants. Voters with children in the home are more narrowly divided.

Eighty-four percent (84%) of Republicans and 58% of voters not affiliated with either major party say children born to illegal immigrants in this country should not automatically become U.S. citizens. Democratic voters are almost evenly divided on the question.

Arizona has been criticized by President Obama, major Hispanic groups and the president of Mexico, among others, for its new law that requires local police to check the immigration status of anyone they stop for a traffic violation or other kind of violation if they suspect the person is an illegal immigrant.

Sixty-six percent (66%) of Arizona voters favor that law, while 24% are opposed and 10% are undecided. Since late April when Governor Jan Brewer signed the measure into law, support for it has ranged from 64% to 71%.

Among voters nationwide, 58% favor passage of a law like Arizona’s in their own state. […]

The new law is already having a major impact on politics in Arizona. Brewer, who was struggling against several Republican Primary challengers, is now the favorite of 61% of GOP voters since signing the immigration law and is expected to easily win the August 24 primary.

The general election governor’s race is also shaping up in part as a referendum on the law since Brewer’s expected Democratic opponent, state Attorney General Terry Goddard, opposes the immigration statute. Brewer now leads Goddard by 18 points — 53% to 35% — in the latest Rasmussen Reports survey of the race.

The Obama administration is reportedly close to filing a federal court challenge of the Arizona law, but only 23% of Arizona voters think that’s a good idea. Sixty-two percent (62%) say the U.S. Justice Department should not challenge the legality of the new law in court. Another 15% are not sure.

A Justice Department challenge is not popular nationally either: 26% favor a challenge, but 56% do not.

Members of the president’s party in Arizona are evenly divided over whether the Justice Department should challenge the law. Eighty-three percent (83%) of Republicans and 60% of unaffiliateds oppose such a challenge.

But a plurality (49%) of Democrats in the state oppose the law itself. Ninety-two percent (92%) of Republicans and 67% of unaffiliated voters support it.

Supporters of the law say it’s necessary because the federal government is not enforcing immigration policy and illegal immigrants are an increasing budget and public safety burden on the state. Critics complain that the law may lead to racial profiling.

Sixty-four percent (64%) of voters nationwide believe the federal government by failing to enforce immigration law is more to blame for the current controversy over Arizona’s new statute than state officials are for passing it.

Seventy-three percent (73%) of voters in Arizona also support strict government sanctions on employers who hire illegal immigrants, just slightly higher than support nationally. Only 15% oppose such sanctions, with 12% more who are undecided.

Like voters nationally, however, most in Arizona (57%) favor an immigration policy that welcomes all immigrants except ”national security threats, criminals and those who would come here to live off our welfare system.” Just 27% oppose such a welcoming policy.