Rand Paul Wants To Cut Off Aid To The Palestinian Authority—What About Aid To Mexico?

Rand Paul, eager to advertise his availability to Sheldon Adelson, has proposed the "Stand With Israel" Act to cut off aid to the Palestinian Authority. 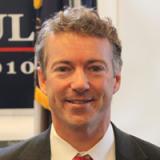 I think it is clear by now: Israel has shown remarkable restraint. It possesses a military with clear superiority over that of its Palestinian neighbors, yet it does not respond to threat after threat, provocation after provocation, with the type of force that would decisively end their conflict.

But sometimes restraint can work against you. Sometimes you just have to say, enough is enough.

Nearly six weeks ago, I proposed a bill called the “Stand With Israel Act.” Its purpose was to cut off the flow of U.S. taxpayer dollars to the Palestinian Authority if it allied with Hamas — the same Hamas that just murdered these three teenagers.

So let’s be clear: U.S. taxpayer money may soon be going to an entity kidnapping and murdering Israeli and U.S. children.

That is unconscionable, and it must end.

Meanwhile, back in the unimportant area of the world (to Washington DC) known as the United States, American sovereignty has utterly collapsed.  Gang members are entering the country.  Illegals are murdering and kidnapping on American soil.  The nation of Mexico is actively furthering the invasion.

The United States gave Mexico $265 million in foreign aid in 2013.  Some House Republicans are urging that foreign aid be suspended until the border crisis is resolved. [GOP: No foreign aid to Mexico, Central America until border crisis resolved, by Peter Kasperowicz, The Blaze, July 1, 2014]

Will Rand Paul sponsor a "Stand With America" Act in the Senate to support this effort?  Or is it the libertarian position that we have to pay for our dispossession?

Needless to say, this is not preventing Beltway conservative newspapers from calling Rand Paul an anti-Semite.