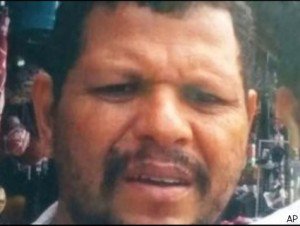 The inevitable occurs — probably the first of many.  Brandon Darby reports,

Lubbock, Texas — An illegal immigrant who was released by U.S. authorities with a Notice to Appear has been arrested for the alleged murder of a woman and kidnapping of children on U.S. soil.  The alleged crimes occurred after the man was released.

The man, Pedro Alberto Monterroso-Navas, entered the U.S. illegally with children and turned himself in to U.S. Border Patrol agents. He was processed and released, as are all illegal immigrants who come as unaccompanied minors or incomplete family units from Central America. The alien is from Honduras.

The arrest was first reported by the Associated Press (AP), but Breitbart Texas has exclusively confirmed that the man was part of the Obama Administration’s catch and release policy for family groups from Central America.

A U.S. Border Patrol source who spoke with Breitbart Texas on the condition of anonymity provided Breitbart Texas with the alien registration number for the man, and the event number for the man’s apprehension. He was processed in the McAllen station of the U.S. Border Patrol. The alien’s registration number is 202027386. The event number for his apprehension is MCS14061487. The “MCS” designates the McAllen station, the “1406” designates that the man was apprehended in June of 2014. A separate Border Patrol source confirmed that the man was apprehended on June 26, 2014 with two children he claimed were his own. He told U.S. authorities he had family in Metairie, Louisiana.

As of this writing, this is the headline on Drudge.

As of this writing, the headline on the Huffington Post is an attack on the Koch Brothers for funding economics classes.