This week marks the beginning of the long Islamic month of Ramadan where jihad murders apparently count for more in terms of delivering the enthusiast to Allah heaven (advertised as including 72 virgins). As a result, the month tends to be even more violent than the regular ones.

It has become the custom of TheReligionOfPeace.com website to keep daily track of the body count, giving the following explanation:

Muslims often insist that other religions are just as violent as theirs and that the bigger problem is “Islamophobia.” We put that narrative to the test each Ramadan with a running count of ALL terror attacks, categorized by motive. 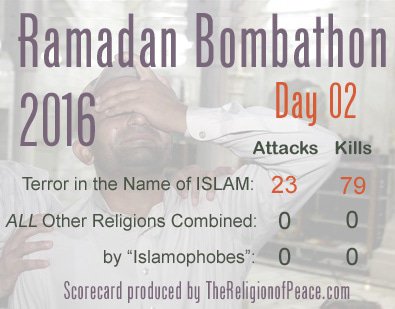 The Koran commands Muslims to kill infidels if they do not submit, so the beheading of 21 Egyptian Christians by ISIS last year was considered a virtuous act by followers.

Simple execution does not satisfy the bloodlust of some jihadists. Their murders often express a genuine creativity in horrific violence, such as crucifixions, beheadings and burning people alive.

Islam scholar Robert Spencer of JihadWatch has been putting out a series of brief videos titled The Basics of Islam (viewable on his Youtube channel). A recent one, #8 — The Meaning of the Word “Jihad”, is timely.

ROBERT SPENCER: Jihad is the central duty of every Muslim — it’s Arabic for “struggle.” Muslim theologians have spoken of many things as jihad— the struggle within the soul, defending the faith from critics, supporting the growth of the faith and its defense financially and even migrating to non-muslim land for the purpose of propagating Islam, But violent jihad is a constant of Islamic history and a central element of Islamic theology. Many passages in the Qur’an and the sayings of the Islamic Prophet Muhammad are used by jihad warriors today to justify their actions and to gain new recruits. No major Muslim group has ever repudiated the doctrines of armed jihad. The theology of jihad which denies unbelievers equality of rights and dignity is available today for anyone with the will and the means to bring it to life. . .

In the article following, Spencer explains the month of mass murder:

As Muslims struggle to increase their devotion to Allah, expect more mass murder.

Another Ramadan is upon us, and no less an authority on Islam than Barack Hussein Obama has assured us that “for many, this month is an opportunity to focus on reflection and spiritual growth, forgiveness, patience and resilience, compassion for those less fortunate, and unity across communities.” Meanwhile, a Muslim whom Obama would disparage as a “violent extremist” who has hijacked the religion of peace, Islamic State spokesman Abu Mohammad al-Adnani, called on Muslims to use this Ramadan to “get prepared, be ready … to make it a month of calamity everywhere for nonbelievers…especially for the fighters and supporters of the caliphate in Europe and America.”

Ramadan 2016 began with the news that a group of Muslims in Jordan were so filled with pious fervor that they murdered five Jordanian intelligence officers in an attack on a security office. The perpetrators may have been acting upon the understanding of Ramadan that a jihad group enunciated back in 2012: “The month of Ramadan is a month of holy war and death for Allah. It is a month for fighting the enemies of Allah and God’s messenger, the Jews and their American facilitators. One of our groups aided by Allah managed to bomb a bus full of Jewish tourists, plunderers of holy lands, after careful tracking. The holy war is not confined to a particular arena and we shall fight the Jews and the Americans until they leave the land of Islam.”

So which is it? Is Ramadan a time to “an opportunity to focus on reflection and spiritual growth, forgiveness, patience and resilience, compassion for those less fortunate, and unity across communities,” or is it “a month of calamity everywhere for nonbelievers”?

In fact, it’s both. During Ramadan, Muslims are exhorted to renew and deepen their devotion to Allah. Hence it is a time when they’re supposed to grow more generous and kind toward their fellow Muslims. However, the Qur’an says: “Muhammad is the Messenger of Allah, and those who are with him are severe against disbelievers, and merciful among themselves” (48:29). If the Ramadan imperative is to become more devout, the Muslim who applies himself diligently to the Ramadan observance will simultaneously become more both merciful to his fellow Muslims and more severe against the unbelievers.

Murdering infidels thus doesn’t contradict the spirit of Ramadan; it embodies it. The Kavkaz Center, a website operated by Chechen jihadists, explained in a 2010 article that the idea of Ramadan as a time for warfare against infidels went back to Muhammad’s time: “The month of Ramadan in the life of the Prophet (pbuh) and the righteous ancestors was a month of forthcoming. The greatest battles during the lifetime of the Prophet (pbuh) occurred in this blessed month, the month of jihad, zeal and enthusiasm.”

Obama is, true to form, severely misleading the American people when he focuses exclusively upon Ramadan’s exhortation to charity (the part of the Qur’an verse about being “merciful” to one’s fellow Muslims) without mentioning its imperative to terrorize infidels (the other part, about being “severe” toward the unbelievers). But as we have seen already in Jordan, all too many Muslims around the world are fully aware of that part of the Ramadan observance, and are ready to carry it out.

It is folly to pretend that the aspect of Ramadan that makes it a more dangerous time for non-Muslims doesn’t exist: dangerous, suicidal folly. But the fact that no one in the public square even thinks to question Obama’s Ramadan congratulations, which roll around every year in the same form, shows how widespread that folly is. Obama’s Ramadan message for this year concluded: “I can think of no better way to mark my Administration’s last celebration of Ramadan as President than to honor the contributions of Muslims in America and across the world for Eid. Ramadan Kareem.”

What contributions of Muslims in America? He has alluded to them before, but once again he didn’t bother to list any, and of course no one asked. That Muslims have made great contributions to America (beyond spurring tremendous developments in airline security, that is) is simply an unquestionable dogma of our silly and stupid age; no one needs ask the President for examples, because those contributions are taken as axiomatic, with only “Islamophobes” questioning them. That there aren’t any actual such contributions is an inconvenient fact, to be sure, but one so thoroughly obscured by propaganda that everyone feels it can be safely ignored.

The cognitive dissonance here equals that about Ramadan itself. And as our Ramadan follies and willful blindness continue, more Infidels will die.