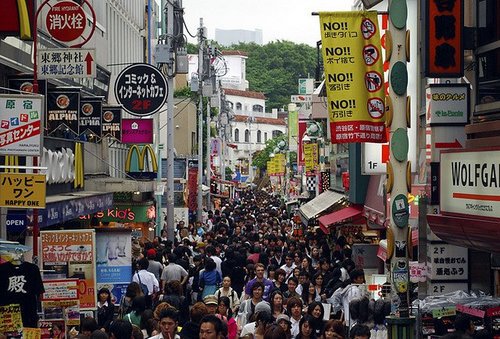 Radio Derb: Who Has Been Thinking Long-Term About Demographics?

In this week's podcast I do a follow-up to one of the items from last week's:

Last week I wondered aloud why politicians make such a show of thinking long-term in the matter of climate change, but seem unable to think long-term on topics just as momentous, like mass immigration.

I read out some of those suggestions.  Then:

Thanks to all who contributed there. On the other side of my question — I mean, why we seem incapable of long-term thinking about demographic issues — it's worth remembering that not all of the First World is so incapable.

The Japanese, for example, have been thinking about demographics for quite a while; perhaps because they have a big population in a resource-poor territory most of which is too mountainous to support high population densities.

The Japanese established an Institute of Population Problems as early as 1939. Back then the worry was over-population, and that continued to be the case through a postwar baby boom and into the 1950s. There were policies to discourage population growth.

In the 1960s thinking turned to the problems that might arise from a declining population, beginning it was calculated in the 1990s.

In fact Japan's population peaked in 2008 and is now falling by about a quarter million a year. Fertility rate is low, ranked 211 out of 224 nations. Median age is high at 46.1, tied with Germany for second place in the world, behind Monaco.

Main point here: The Japanese have been doing the long-term thinking about demographics that we haven't been doing; and they've been doing it for 76 years.

What have they concluded from all that thinking? Well, here's a thing they have not concluded: They have not concluded that mass immigration is the solution to their demographic problems. They believe they can keep their standard of living — one of the world's highest — maintain their technological advantages, and manage their national debt, without importing millions of foreign workers. There is no constituency in Japan favoring mass immigration. In Japan, even business moguls are patriotic.

Good luck to them. Nobody knows the future, of course; but I'd wager a modest sum of money that in the world of the middle 21st century the people of Britain, France, Germany, and the U.S.A. will be cursing my generation and the one before it for not following Japan's example.

At the very least the Japanese have spared themselves decades of public lying — of empty and dishonest cant about how "vibrancy" enriches us and "diversity" is a strength, when it is perfectly obvious to everyone that the presence of huge racial and cultural minorities is a source of endless social friction and discontent.

As usual, I shall archive a full transcript on my own website next Wednesday.  In the meantime, further excerpts from the transcript may appear here as articles or blog posts.