Back in 2009, in one of my online diaries, I wrote about what I called "happy-in-obscurity" countries — nations, that is, that don't generate much news, where nothing much happens, but where life is peaceful and modestly prosperous, and citizens have a good shot at ordinary, unsensational happiness. I cited New Zealand, Taiwan, and Finland as examples.

And then I said maybe Uruguay should be added to the list. Quote from me, after chatting with a lady from Uruguay back then:

She said things are just fine: some poverty, a touch of Latin-Americanness still in politics (the place is on its umpteenth constitution), the usual left-intellectual nuisances in the universities trying to make trouble, localized crime problems (which she blamed on immigrants from Brazil). On the whole, though, she made Uruguay sound like a pretty nice place. 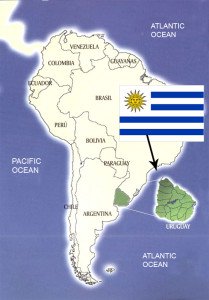 Well, here's reinforcement for my Uruguayophilia, from the New York Times, no less. This was the February 9th issue, an Op-Ed by Argentinian lefty journalist Uki Goñi. Sample quotes:

What it lacks in numbers, Uruguay makes up for by ranking as the least corrupt and most democratic country in Latin America — as well as only one of two, along with Chile, rated as a "high income" country by the United Nations …

In a region where democracy is increasingly tested by economic mismanagement, political corruption, drug cartels and environmental crises, Uruguay is the only Latin American country ranked among the world's 20 "full democracies," according to The Economist's 2015 democracy index — ahead even, by one place, of the United States.

End quotes. To make the piece properly Times-compliant, Mr Goñi decorates it with some anti-white tut-tutting about slavery in the colonial period, but on the whole he makes the country sound very nice, in spite of its being full of white people.

The fact of Uruguay's being full of white people is in fact the Great Unmentionable here. Just how white is Uruguay? Mr Goñi tells us that, quote: "Today, the country has a large Afro-Uruguayan community — about 10 percent of the population is descended from slaves." End quote. The CIA World Factbook, on the other hand, gives "white 88 percent, mestizo 8 percent, black 4 percent, Amerindian (practically nonexistent)."

You have to suspect that Mr Goñi was gilding the lily there: darkening it up a bit, I mean.

I doubt whiteness is the whole story. Argentina next door is even whiter than Uruguay — 97 percent. Chile, the other nation down in the "cone" of South America, is at 89 percent white. Both had issues with political stability in the last century — the names Juan Perón and Salvador Allende mean anything? Uruguay itself wasn't always precisely modelling itself on the Netherlands in years past.

Under 21st-century conditions, though, they're doing well, suggesting that perhaps to be small and agriculturally fertile, with a white supermajority and out of the way of Great Power conflicts, is an enviable situation. Good luck to them.

After I've put Radio Derb to bed I'm going to get online and look up property prices in Montevideo. When civilization collapses, Uruguay may be the place to be.