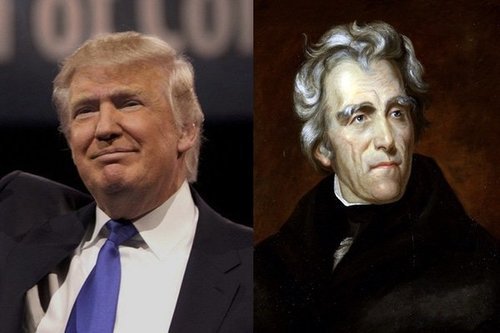 In the NYT, an NPR host writes:

SINCE Donald J. Trump shot to the top of Republican polls last fall, pundits have tried to make sense of his popularity. He has been described as a modern-day product of reality-TV narcissism, or the second coming of European fascism. But as he cruises into the South Carolina primary after beating his rivals by double digits in New Hampshire, it’s clear that neither idea quite explains his strength.

Mr. Trump’s rhetoric resonates with a particular American political tradition. Voters may not know the details of that tradition, but they feel it viscerally when a politician taps into it. Mr. Trump has done just that by emulating a classic model of American democratic leadership.

A clue as to just which leadership model can be found on a map. While Trump fans are spread across the country, they are heavily concentrated in and near the Appalachian states — from Mississippi and Alabama all the way to western Pennsylvania and New York. The northwest corner of South Carolina is one of the most pro-Trump parts of the country. …

Is this true? I don’t have much sense of the geographical concentration of Trump supporters. Ethnically, Trump is German on his father’s side and Scottish Highlander (not Scots-Irish) on his mother’s side.

What could the voters of such a region possibly see in a loud and self-interested New York real estate tycoon? In some respects, he is a type of leader Appalachia has seen before. Students of history will recognize that Mr. Trump is a Jackson man.

Consciously or not, Mr. Trump’s campaign echoes the style of Andrew Jackson, and the states where Mr. Trump is strongest are the ones that most consistently favored Jackson during his three runs for the White House.

What Mr. Trump borrows from Jackson is not an issue, but a way of thinking about the world. Mr. Trump promises to fix his supporters’ problems, no matter who else is hurt. He’s a wealthy celebrity always ready for a fight, a superpatriot who says he will make America great again. He vows to attack government corruption and defend the common man. All this could be said of Jackson. …

Needless to say, Jackson and his Democratic Party enforced a certain idea of America — an America for white people. Jackson was personally cordial to people of other races, but their rights did not concern him. When white Southerners grew tired of Indian nations in their midst, Jackson forced them into internal exile in the West. He could have defended this policy using a Trump phrase: “We either have a country or we don’t.”

Mr. Trump’s proposal for a “total and complete shutdown” of Muslims entering the United States until the government “can figure out what is going on” has a brutal simplicity that echoes Jackson. So does his promise to force Mexico to pay for a border wall. The people Mr. Trump favors are to be protected from all harm. Nobody else matters. …

Could Mr. Trump ride the Jackson vote to ultimate victory? Not unless he adds to it. Jackson’s old coalition no longer dominates the electorate. Nonwhite voters are growing in numbers, and many white voters have told pollsters they would be embarrassed by Mr. Trump as president. Mr. Trump would have to reckon with one of Andrew Jackson’s cherished principles: In America, the majority rules. Assembling a majority today is not the same as it used to be.

Like I said in Taki’s recently in “Alexander Hamilton, Honorary Nonwhite” and “The Ultimate Minority Right,” there have been four stages of evolution of political ideology in the West over the last 400-500 years: