Racism And Anti-Racism─It's A White Thing

The notion that all the fuss about racism and anti-racism is just status-jostling among American whites, with blacks as tokens, or at most support auxiliaries-a bloodless replay of the Civil War, in other words-is nothing new to readers of VDARE.com.

A typical skirmish in the conflict would be me (white) getting dropped from National Review (white) at the behest of furious leftists (white). To the best of my knowledge, blacks took no interest in the business.

This New Civil War only gets the attention of blacks if their race privileges are directly threatened; or if they see an easy opportunity to poke a finger in Charlie's eye, a thing few blacks can resist.

These dismal truths seem to apply at all levels of the conflict. Last week Nicholas Stix posted pictures of the five suspected Tinley Park anti-racist hoodlums so far arrested. They seem to belong to a group named Anti-Racist Action (ARA). 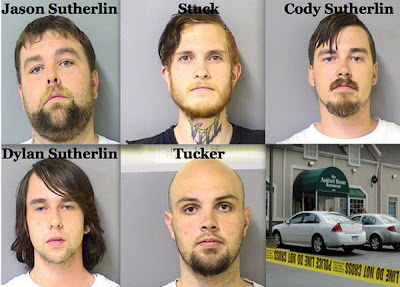 Imagine I showed you just the pictures of those five suspects, and told you they were principals of a KKK chapter. Would you have any reason to doubt me?