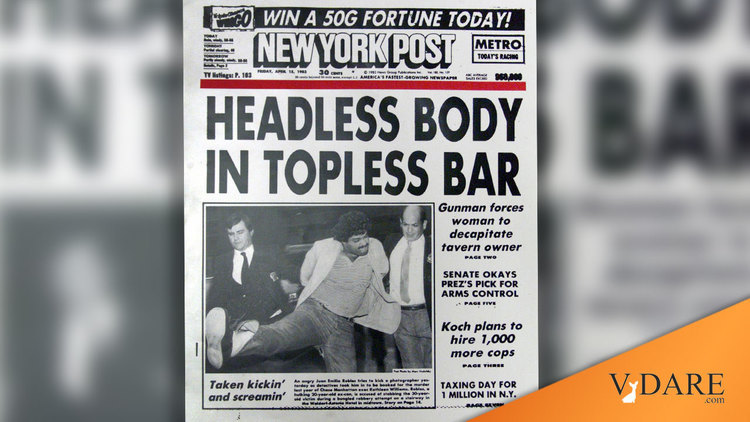 While the "headless body" headline has long been admired and has produced more than a few chuckles, there was nothing to laugh about concerning the crime.The Post wrote last year that parole had been denied "for an inmate whose crime inspired the sensational 1983 Post headline 'Headless body in topless bar.' A parole board says it would be dangerous to release 53-year-old Charles Dingle because of his 'continued poor behavior' and 'disturbing criminal history.' ... He was convicted of shooting Queens bar owner Herbert Cummings, taking four women hostage, raping one and ordering another to cut off Cummings' head. Dingle is serving 25 years to life for murder, robbery, rape and kidnapping."

Well, the Daily Mail was able to provide a photograph of Dingle, and as I more or less anticipated, he's black. 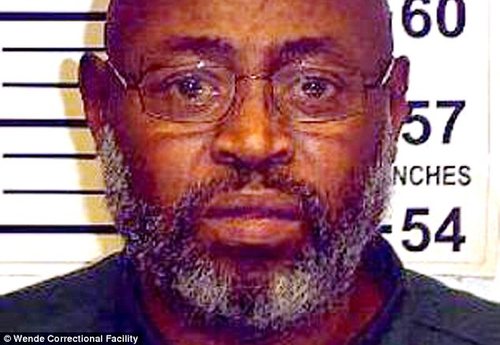 His horrific rampage began at strip joint Herb's Bar in Queens when Dingle - then 23 years old - gunned down the bar's owner, Herbert Cummings.

He then took four women hostage, raping one of them and robbing the others in an alcohol and cocaine-fueled rage.

But Dingle’s crime spree took a bizarre turn when he found out that one of his hostages was a mortician after finding her business card.

He demanded that she extract the bullet from Cummings' head so authorities would be unable to match it to his gun, but when she couldn't do it, he ordered her to cut off Cummings' head with a steak knife, the Post reported.

He later released two of the hostages and took the remaining two with him in a stolen livery cab - with Cummings' head in a box.

The ordeal came to an end when he stopped the car in Manhattan’s Washington Heights neighbourhood and passed out behind the wheel - and his hostages fled.

Two days later, the ‘HEADLESS BODY IN TOPLESS BAR’ headline was splashed across the Post front page and into notoriety, often called one of the greatest newspaper headlines of all time.

Killer behind HEADLESS BODY IN TOPLESS BAR headline hoping to go free after 30 years behind bars, By Thomas Durante, January 23, 2012

The traditional protection of anonymity accorded to rape victims means that we don't know if the woman raped during Dingle's murder/rape/kidnapping/decapitation spree was white or black. (All the more reason for reporters, who do know the races involved, to say so.)I think the man who had his head cut off was white.

But this is what crime was like in the eighties, and this is what reporting is still like. The man who did this is eligible for parole, like the man who killed Kitty Genovese. They're not getting parole, because they're high-profile, famous cases, but many similar, less known killers, have gotten parole...and killed again.

And when they do, as in the Willie Horton case, it's racist to mention it.