Mexicans who illegally grow marijuana in California and elsewhere in the US are not like the hippie farmers of Mendocino County who tend their plants with organic values. Nope, the Mexicans use poisonous chemicals from their homeland that are illegal here because of their danger to public health.

A recent bust by the California Fish and Game found a typically toxic pot patch east of San Jose, the third-largest city in the state. The grow of 8,000 plants was located on a stream that feeds Coyote Creek, a water source for the city. One of the Mexican chemicals found was Furadan, a teaspoon of which can kill a person.

Meanwhile, we citizens are urged to celebrate America’s increasing diversity, which in reality meansMexicanization. (See video.) 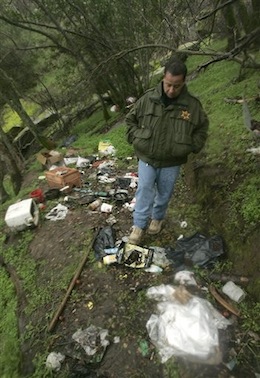 Mexican growers have trashed our public lands for years, including treasured national parks like Yosemite and Sequoia (pictured).

The level of destruction is unconscionable, yet Washington ignores the devastation to pristine wilderness, not to mention the danger to hikers from armed Mexican gangsters. Parts of Sequoia National Park have become no-go zones for visitors because they might get shot.

Experts believe the pot not only poses health risks to those who smoke it, but also to anyone who drinks water in San Jose.

Two hours from San Jose, at the end of a dusty dirt road and then a quarter mile hike down a steep ravine, deputies and game wardens found upwards of 8,000 marijuana plants soaking up the late summer sunshine.'

The growers, thought to be armed and willing to protect a crop said to be worth millions, had cleared out.

The pot is one thing bit the growers, thought to be part of a Mexican drug cartel left behind an environmental disaster.

“Even though these plants are only about 3 feet, the kinds of fertilizers they use these plants will grow 6 or 7 feet in the next month or so. And they’ll be fully mature and fully budded,” said Kory Collins, California Fish and Game Warden. “And obviously all that fertilizer they’re using after the wet season comes it’s all going to wash straight down in the creek bed down there and that’s the huge environmental issue we have out here.”

Aside from the piles trash, rat poison and human waste discovered here, water has been diverted from a stream that feeds Coyote Creek which is a source of drinking water for San Jose. Water now contaminated with deadly poison.

“This is from Mexico. It’s illegally smuggled from Mexico it’s called Furadan and you know a teaspoon or more is enough to killed a person or a deer or really any animals,” said Lt. Patrick Foy, California Fish and Game Warden. “This stuff is sprayed profusely about marijuana grow sites and over the plants themselves to keep the pesticides at bay and that stuff is not rinsed off before it’s processed for sale. So people on the street who are consuming marijuana from these sites are smoking this stuff right here.”

Pesticides, fertilizers, batteries and other materials hauled were from the site.

There is also evidence the growers had already harvested and processed mature plants and were hoping for a second crop, much of which is located beneath low-growing trees, spread across several remote canyons where the only way to find it is by helicopter at the end of a rope.